The royal nuptials of one Prince Red Nut and Meghan Markle are fast approaching.

There’s only 108 days to go before the tradition-defying couple wed on May 19.

Anyone who has been in close vicinity to a couple preparing to marry knows that 108 days is friggen nothing. A blip. A crinkle in the velveteen pillow that cushions the crown.

There’s a helluva lot to plan, from flowers to cakes, dresses to choons, and according to The Times, 36-year-old Markle isn’t gonna take a backseat when it comes to the big day; she’s planning on giving her very own wedding speech.

The bride, who is expected to take the title of Duchess on the big day, is planning an “affectionate” tribute to her new husband and will offer thanks to the Queen, her family and friends. Reports reckon there may even be a couple of jokes. 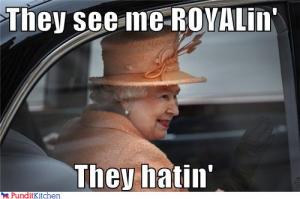 “The feeling is if Meghan’s father doesn’t speak for her, she wants to have the chance to thank her husband and everyone who has supported them. Harry thinks it’s a great idea.”

This is a big deal. If Markle does orate, she’ll be the first royal lehhhdy to speak at her own big day. And why not? Markle is a seasoned public speaker. In 2015, while addressing a UN gathering, Markle said “I am proud to be a woman and a feminist . . . A wife is equal to her husband.” This is in step with that.

It was reported late last year that Markle’s Mum Doria Ragland would be walking her down the aisle, another poo-poo to traditions. But this new report speculates it’ll be her former Hollywood lighting director Dad, Thomas Markle, who’ll do the duty. He’s less likely to speak at the reception, though, as he’s notoriously shy.

800 guests will attend the ceremony to be held at St George’s Chapel at Windsor Castle, the same church where Harry’s father, Prince Charles, wed Camilla Parker Bowles in 2005.

The nuptials are expected to be televised, and we cannot bloody wait.