“Why aren’t we free to move?” was the question writer Izzy Combs posed in a piece by the same name published on Stoney Roads last year.

Part analysis, part anecdotal recount, the exposé was a deeply sobering look at our country’s club culture – one where sexual harassment, unwanted attention and in tragic cases, rape – is commonplace.

Izzy’s story struck a chord among many young Australians, this writer included. It was shared a whopping 2702 times and helped kickstart a conversation around consent – a conversation that was long overdue.

But as impactful as the piece was, a pervasive culture like the one in our clubs doesn’t disappear overnight. Thankfully, others in the scene have started standing up as well – including a woman by the name of Kate Pern. 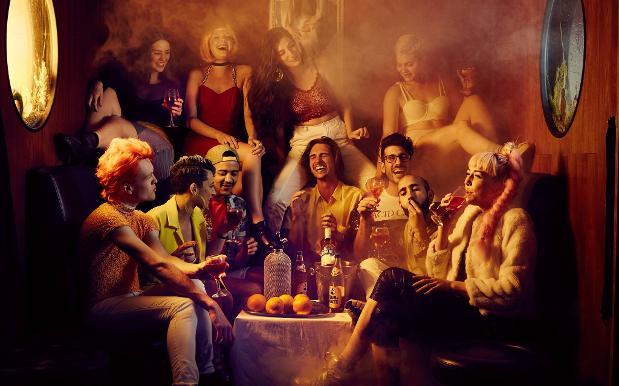 During the day, Kate works as a nurse with a particular interest in sexual assault prevention. At night, she’s the Safety and Inclusion Coordinator at Melbourne label Jus B Chill‘s Cool Room club nights. It’s a job we’d previously never heard of… and it’s the first of its kind in Australia, to our knowledge.

We chatted to her about the unique role, why it’s even a thing and how the party scene Down Under could be a much more chill place if there were more people like her.

How was the concept of a ‘Safety and Inclusion Coordinator’ born?

“The Jus B Chill crew wanted to put an emphasis on creating a safe space after seeing their friends continuously being harassed at club nights. It was becoming the norm – going to the club, getting sexually assaulted. It shouldn’t be like that.

The idea was to create a space where their friends could come, party, dance, wear what they want, be themselves and not be harassed. It’s pretty simple. From the first night we ran, we had non-gendered bathrooms and posters up about it being a ‘creep free zone’ where only consensual behaviour is welcome.” 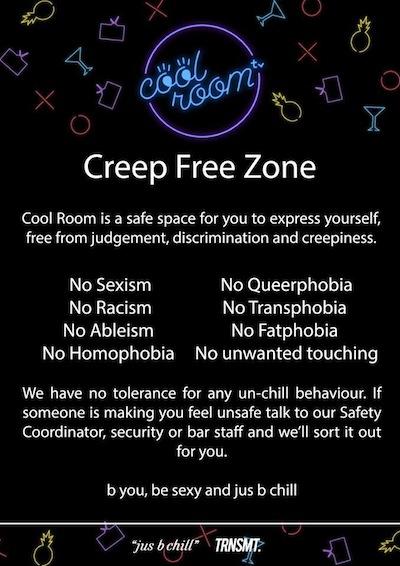 But, Kate tells us, since there is so much involved in organising and running an ongoing club night, they were finding it hard to keep inclusion a top priority.

“Jus B Chill wanted to bring someone on board who really understands this stuff, is passionate, and someone who can make [keeping the club creep free] their sole responsibility,” she adds.

“It’s a pretty exciting initiative and it’s pretty cool to be a part of it.”

Why were you chosen for the role?

“During the day, I work as a paediatric nurse and sexual assault prevention is something I’m really passionate about and involved in, which is one of the reasons the team approached me,” she says.

Kate also works as a Workshop Manager for Empowered Together, an education group specialising in primary prevention of sexual assault – so she was a natural choice.

Lots of other club nights promise a zero tolerance for discrimination. What’s so different about this night?


“Usually when [promoters] run nights, they’re this mysterious entity, they post on their social media behind their nights page, and you don’t know who it is.”

At Cool Room, Kate is a face people can recognise. She even provides a photo of herself to the door person to post at the entrance so punters know who she is at a glance, if they need to find her later on.

The difference between Cool Room and other party nights like it is the trusting relationship they have with security staff, she reckons.

“The team of security at The Bottom End [one of the venues where the night is held] take initiative to train themselves. We just made a point of talking to the whole security team on the nights to make sure we’re all on the same page.

Often when [event promoters] try to do the right thing, they’ll say ‘we have a no tolerance policy, good behaviour is expected’ – but then, when you don’t have security staff on board with that, it can all fall in a heap. If security staff aren’t trained properly, it can be them perpetuating the harassment.”

How have the crowd responded to your role?

“The night that ran in December was my first night in the role, and the response was really overwhelming.

Fortunately, no incidents occurred, which could also be because the crowd was great, and we can attribute that to having a really, really good door person, who clearly communicated the expectations of the night.

We don’t knock back anyone because of the way they look, but if they’re being arseholes in the line, our wonderful door person just makes expectations of behaviour really clear – “no queerphobia, no transphobia” – and then they leave.

So many people approached me who had never been to Cool Room who were amazed at how safe and comfortable they felt.

I had women saying how comfortable they felt walking around, in the outfits they wanted to wear, without feeling like they’d be approached by men. I had people from the trans community saying they felt really safe and confident coming to the night because of the promotions we’d done.


I think a really big part of it is that people know that it’s not ok to grope someone on the dance floor, and sexually assault someone and harass them – but they do it because they think they can get away from it, and sadly so often, they can. So making it really clear what won’t be tolerated is important.”

Cool Room is pretty big across social media – what has the feedback been like on the line?

“We’ve had a couple of trolls.

It makes me really happy because it means we’re doing the right thing. If we’re got trolls, we’re doing something right. During the first season, a guy shared the original Creep Free poster, and was like, ‘THIS NIGHT SHOULD BE IN NORTH KOREA, WHAT IS THIS DICTATORSHIP!?’ which I thought was really cute. Then our most recent troll was just someone with sexist jokes e.g. ‘women should be in the kitchen.’ But, I mean, if you’re pissing off the MRA’s, you’re doing the right thing.”

And what’s Jus B Chill’s biggest hope for the Aussie club scene in the future?


“As well as being able to create a safe space for people to come and party, the thing we at Jus B Chill want the most is for other venues to take up this initiative. If this sort of thing became the norm, it would be amazing. We’re already seen other venues begin to pick this up. We would love every venue to follow our lead – that would be really nice.”

Cool Room’s next night is on May 13th – and if you go, Kate’ll be there to guarantee you feel #freetomove.