McSweeney’s, which has made its niche within the US-publishing sphere, boasting a series of widely read literary journals and books, has come up with the goods in aid of the country’s declining newspaper circulation.

The publishing house, founded by author Dave Eggers in 1998, has paired up with Tribune Media Services, to create a standalone newspaper comics and activities page, which will appear across the US and Canada. ‘The Goods’ will feature “a gallimaufry of games, puzzles, comics and other diversions,” from a series of contributors each week.

Readers will be offered such diversions as a guide to creating your own secret language; a maze navigating George Washington’s famous curly locks; and clip-out paper dolls of Grigori Rasputin. Think of it as a more sophisticated, tongue-in-cheek comics page, which is aimed at both kids and adults.

McSweeney’s will curate the page, with artists and award-winning writers contributing week to week, from the likes of Mo Willems, Jon Scieszka and Colin Meloy from The Decemberists. In its endeavour to preserve the printed newspaper business which is in dire straits, ‘The Goods’ will debut on Presidents Day (February 21). Looks good. (Groan.) 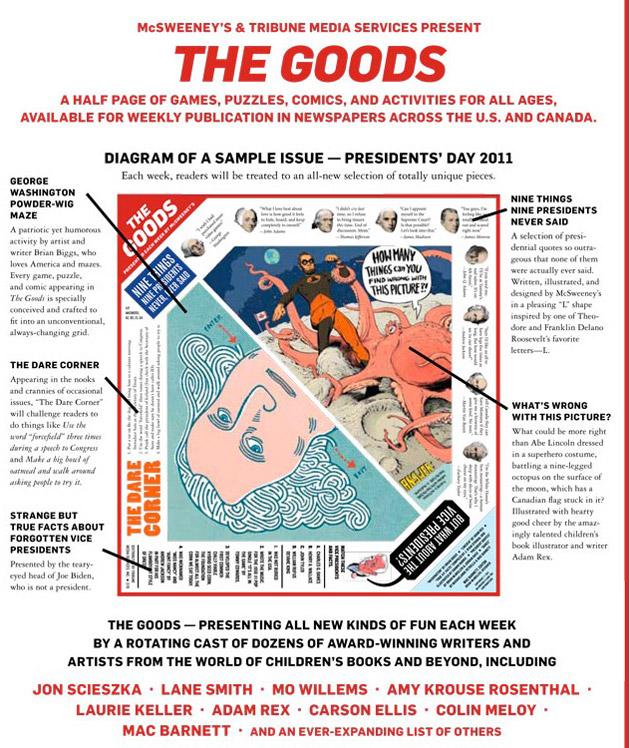