Errr… bit of a weird one.

We noticed that Martin Shkreli, maverick pharmaceutical bloke who upped the price of a HIV medication by 5000% and then consequently decided he would try his hand at being a collector of one-of-a-kind hip-hop albums, was having a birthday party online.

Uh. I’m having my birthday party on the internet. Come have cake and stuff. https://t.co/xK2MCcQiBQ

We’d never used Blab before, probably because Australia’s internet speeds are so terrible that the mere idea of multiple webcams streaming would likely be enough to crash the entire country’s connection. But we decided to give it a red hot fucking go.

So, half of PEDESTRIAN.TV‘s editorial team called in. We got there. We also didn’t know if our mic was working, which was kindly cleared up by Shkreli telling us “Yo, I can hear you. That’s kind of the point. Are all Australians like this?”

Yes, Martin. We are.

Here’s Martin looking very bemused as we tried to figure out what the fuck was happening: 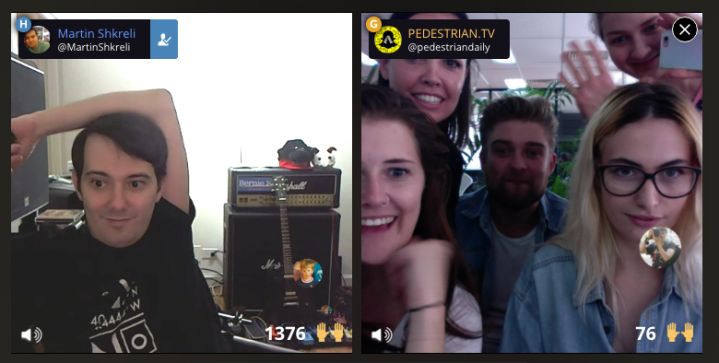 We didn’t really want anything in particular – we just wanted to pop in and see what Martin Shkreli’s internet birthday looked like. He wouldn’t even show us his “huge” cake, despite us asking him to “whip it out”.

But hey, we said hi to the bloke who reckons he straight up bought the rights to Kanye West‘s ‘The Life of Pablo’ and was scammed. It was… a short, but strange experience. We have it on good authority that after we exited the party, someone on the live chat said ‘Hey, where did those loose Australians go?’.

Anyway, back to the daily grind. Which Kardashian story can we post next to make y’all angry in our comment section?