Much as it pains me to remind you all, Malcolm Roberts is once again a paid Senator in the Australian Parliament. Virtually by default, he rose to the top of the One Nation voting card in Queensland after all the other dunderheads Pauline Hanson found either exposed themselves as criminals or became otherwise entangled in a bush, and the party then utilised the voting system designed to populate the Upper House to score a seat quota in the Senate, which they subsequently gave to Malcolm Roberts. He’s getting paid taxpayer money to represent the people again. Therefore we have to at least tangentially pay attention to what he does.

Today, he’s updated his Twitter profile picture with a Twibbon – one of those fancy graphic overlays you can put on your photo to show everyone you care about something.

The Twibbon is a One Nation push to pay more for milk at the supermarket in a bid to aid struggling farmers in the competitive market. 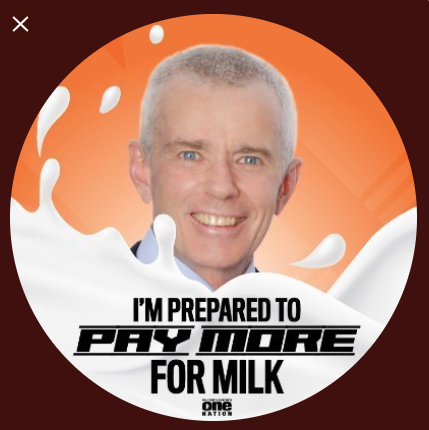