Hold onto something, mates. There’s a hell of a lot to take in here.

Lisa Origliasso has taken to Instagram this afternoon to share a harrowing and searing call out of an unidentified person she alleges has been conducting an unending stream of harassment against her family for 2 years, while simultaneously hiding behind a protective veil of “celebrity and social position.”

The post was hastily deleted from Origliasso’s Instagram feed, however was online long enough for screen shots to preserve it. 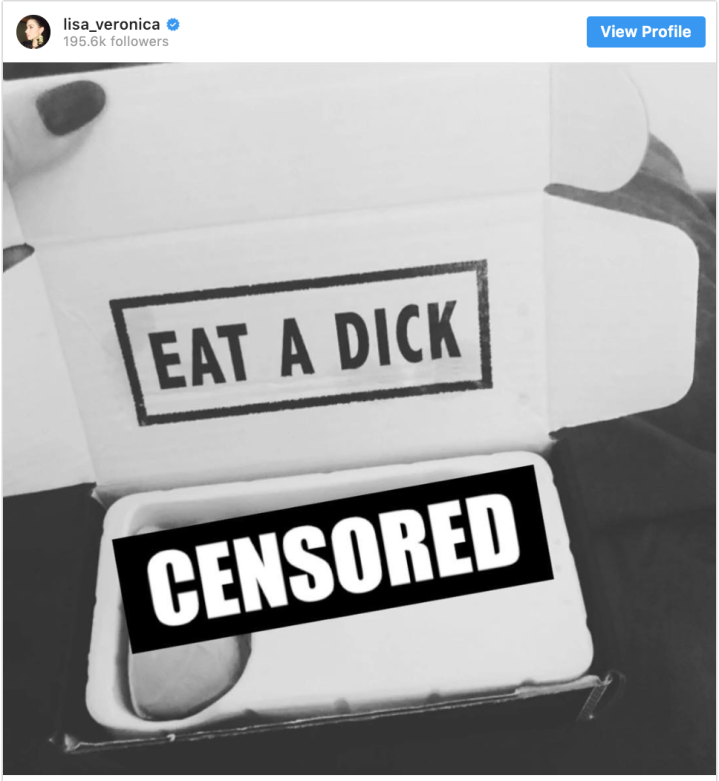 The accompanying caption, in full, read as follows:

I am choosing to speak out & put this here in hopes to disempower the person who has continued to torment me and my family for the past 2 years.

This might come as a shock. But I am choosing to speak out publicly because I want other people going through anything like this to know they are not alone. Harassment, intimidation, bullying & abuse is not okay. Just because I haven’t spoken out about it doesn’t mean it’s not happening. It’s dangerous to one’s wellbeing to continue to endure private and public harassment, while being viewed as “attention seeking” for speaking out.

This package showed up addressed to me days after my wedding. And is just one of the countless ways this person has chosen to intimidate, harass (and now sexually harass) and hurt me. I want to make it clear that this has been happening exclusively over the past 2 years. Publicly & not so publicly, anonymously & not so anonymously.

From floods of abuse via texts, emails, a shocking amount of fake social media accounts having the same unprovoked episodic tirade of abuse, created purely to leave hate, spread lies about me, and defame my character and name.

My social pages and emails have been relentlessly hacked. It’s hard to fathom this type of harmful & obsessive behaviour.

Why am I writing this publicly? Because I won’t be compliant in silence anymore. The person knows time is up. They have taken protection in their celebrity & social platform for long enough.

I stayed quiet for concern for my sister’s safety in the presence of this person, but that is being handled on a legal platform now.

A year ago I gave legal written notice to this person to cease the harassment and defamation. It changed only to a private platform, and hidden harassment. And before anyone wants to doubt my integrity or say this is for publicity – understand I gain nothing out of this situation.

My sister, my Mum’s health, my career & my relationship deserve protection now. I will not stand by while people protect and placate an abuser’s public reputation at the expense of mine and my family’s safety & peace.

For anyone going through this too, never be afraid to speak up. And please seek help. God is watching.

It should be noted that Lisa offered no indication as to who exactly she was talking about. However sister Jess Origliasso has repeatedly called out a certain ex-girlfriend over alleged systemic harassment in the past.

We’ll see how this one pans out in due time.