It seemed like a moment of true cosmic providence when Mike Baird smokebombed out of state politics a mere two days before the huge planned Keep Sydney Open rally in Kings Cross with Flight Facilities.

Now, we’re seeing the flipside of that alignment of the celestial spheres. According to a post on the Keep Sydney Open Facebook page, the Police Commissioner is attempting to shut down the rally via an application to the NSW Supreme Court. 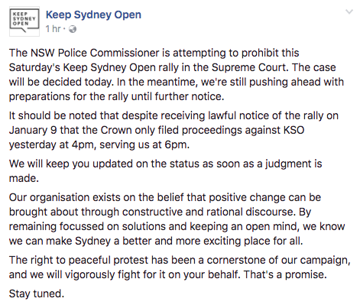 According to the post, KDO lodged lawful notice of the rally on January 9th, but the application by the Police Commissioner was only made at 4pm yesterday.

This follows KSO’s statement yesterday after Mike Baird’s resignation calling for his successor – likely to be Gladys Berejiklian, a Liberal moderate – to revitalise Sydney “with smart solutions to guarantee fun, culture, economic opportunity and safety for all of us.”

We’ll keep you posted on how this is going today.