This country is a stupid, beautiful country. Where else could you read about one of our glorious national emblems popping someone’s bolt-ons and it not be satire?

This story is an oldie but a goodie, and it’s honestly one for the ages, so chuck on your Stackhat and let’s begin. Back in 2016, a woman in South Australia attempted to for a leisurely bicycle ride in the Clare Valley region with a mate, when they spotted a roo on an embankment on the side of the road.

All very picturesque and lovely, until what happened next.

According to Nine News, Sharon Heinrich told AAP that as they quietly passed by the kangaroo, he bounded up on to the road, landing with his hind legs first on her torso and then onto her friend’s back. I mean, can you IMAGINE? It’s terrifying enough driving past one in a car and thinking it might fuck your bonnet up at any given moment. But bounding on top of you on a bike? It’s the stuff of nightmares.

Both Sharon, 45, and her mate Helen Slater were knocked off their bikes, but in case you were wondering, the kangaroo seemed totally fine and unharmed. Sharon told AAP: “I’ve gone to ride past, I thought: ‘He’s cute,’ and he’s just jumped me and taken out the side of me.”

READ MORE
Can I Get An F In The Chat For This Poor Dude Who Copped A Snake Bite To The Penis Yesterday?

“As I’m falling, I felt him push off me and then he’s flown to Helen and taken her out. He looked peaceful. He didn’t look angry.” That’s even more terrifying somehow. The cold, calculated precision with which the kangaroo took these two ladies out. Pure evil.

While Sharon was mostly unharmed during the incident, 3 of her ribs and her two breast implants didn’t survive the ordeal. She had to undergo surgery for the ruptured implants, but did explain that they “worked as airbags”. So that’s something. 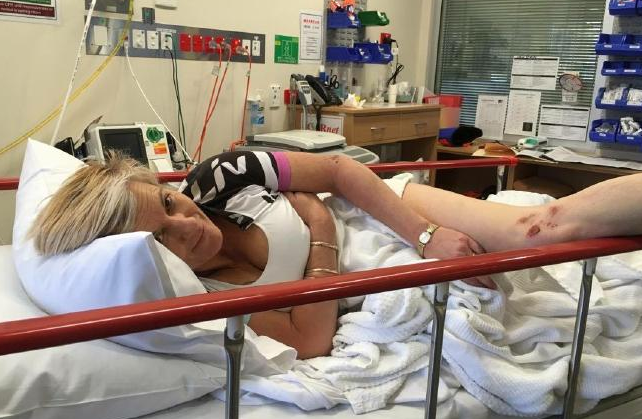 Sharon after her run-in with the roo. Source: Nine News

But we’ll be honest when we say that our favourite part of this story (apart from the fact that both of the women are alive, of course) is that Sharon’s husband got her a stuffed toy boxing kangaroo as a “memento” of the occasion. The big joker. Sharon said at the time: “It’s all you can do now: laugh about it and heal.” And never ride your goddamn bike again, Sharon.