Aussie model Jesinta Franklin has addressed the criticism she received online over a post about racism and missing children on the day missing four-year-old Cleo Smith was found “alive and well.”

Franklin shared an Instagram Story hours after police revealed they had found Cleo in a home in Carnarvon.

At the time, the model and wife of Indigenous AFL superstar Lance Franklin shared the following Instagram Story, highlighting the disparity between the attention given to missing Indigenous children and missing white children:

Without taking away from the joy of finding a missing child alive and well, I can’t help but think about the disparity that exists in this country between missing children who are White and Indigenous children when it comes to the visibility and coverage of the case.

I have read so many heartbreaking stories of missing Indigenous children that garner hardly any media coverage or the social media coverage that a case like Cleo’s did.

I have no doubt the widespread broadcasting of information in regards to the case assisted the phenomenal efforts of the WA police force in locating this beautiful little girl and reuniting her with her family.’

Posting this because I think we need to do better for all children who go missing and their families.” 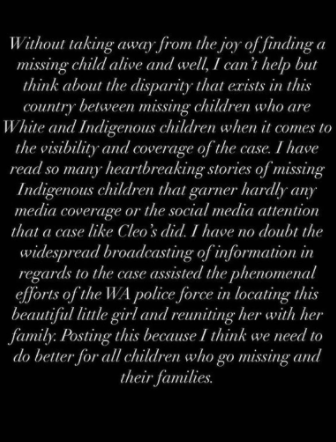 Although her points were extremely valid, News.com.au reported that the model faced “racially charged” backlash and subsequently took the post down.

She has now responded in a new series of Instagram Stories.

“Thank you to everyone who engaged in meaningful conversations in regards to my post about the lack of equality in the visibility of cases of missing children,” she began.

“Confronting and often forgotten topics like this are important to continue to talk about. I received an outpouring of messages about the lack of action and media attention for not only missing Indigenous children but all children of colour.”

She added, “I hope that all missing children, regardless of ethnicity, have an equal presence in the media and that articles to come, give voice to this disparity and injustice.

“This doesn’t take away from anyone else’s story or pain, just highlights how important it really is.” 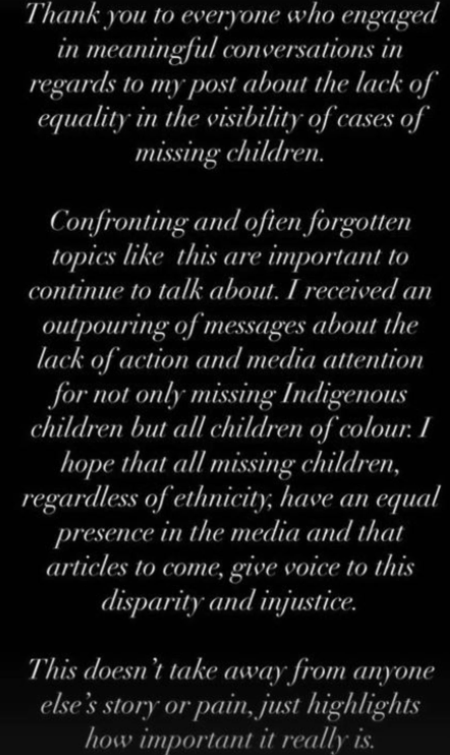 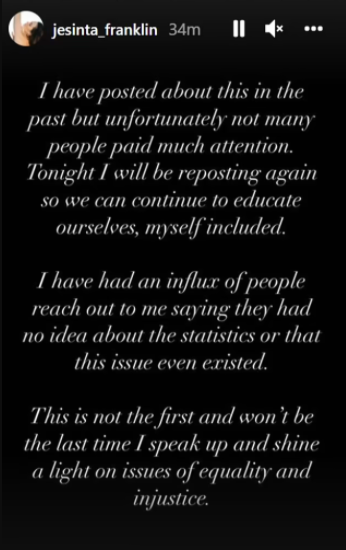 In a subsequent Instagram Story, she directly addressed the response she received to her now-deleted IG Story, writing: “I have posted about this in the past but unfortunately not many people paid much attention. Tonight I will be reposting again so we can continue to educate ourselves, myself included.”

She concluded, “I have had an influx of people reach out to me saying they had no idea about the statistics or that this issue even existed.

“This is not the first and won’t be the last time I speak up and shine a light on issues of equality and injustice.” 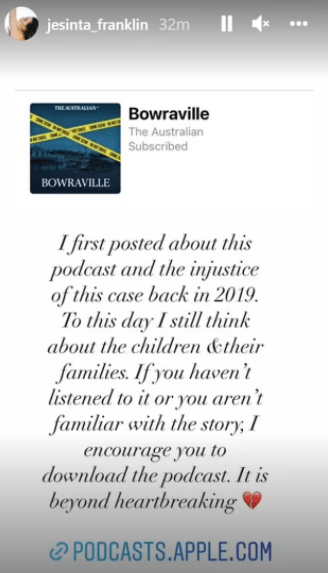 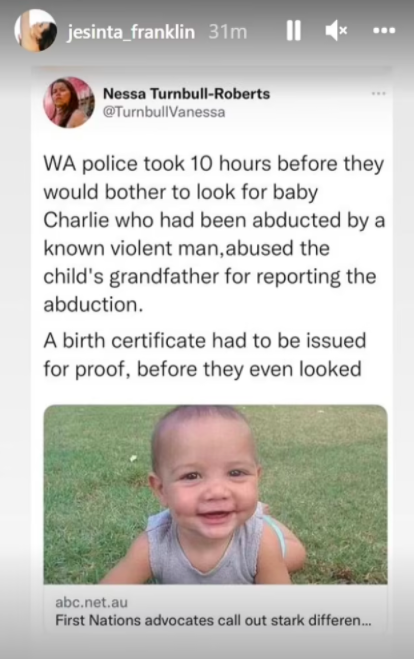 Franklin also recommended that her fans listen to the Bowraville podcast, which covers the unsolved murder of three children in the Mid North Coast hinterland of New South Wales, who were all killed within five months of each other.

She also shared a post about the case of 10-month-old Indigenous baby Charlie Boy Mullaley who was tortured and killed in Western Australia in 2013, after being kidnapped by his mother’s ex partner.

Head here to have a listen to the podcast.