The Logie Awards wouldn’t be the tacky Strayan shitshow we know and love without a bit of salty, homegrown celebrity beef, would it?

DJ‘s Ambassador and TV presenter Jestina Campbell swanned down the red carpet on Sunday night, and it didn’t take long for Kate Langbroek to fire some shots directed at the model’s choice of custom Camilla & Marc gown:

This cannot be for real. #logies #beachwear #desperate(for pants)

Her savage smackdown didn’t go unnoticed, with Campbell commenting on the Instagram post with a quip about Langbroek being on a couch, rather than at the event: 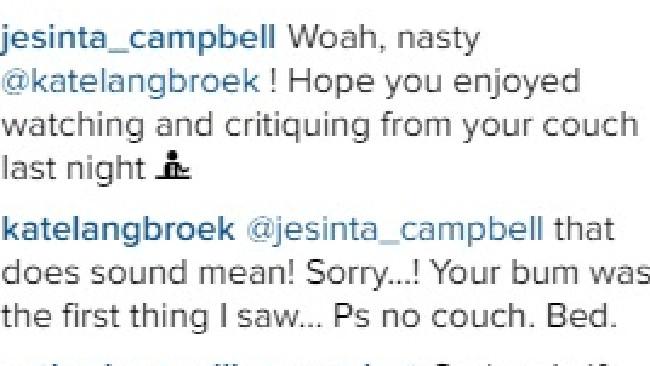 It did not end there.

Campbell, no stranger to clapping back, graciously popped Langbroek back in her place in this lengthy Insta post:

“I want to empower women to follow their dreams, I want to empower them to wear what they desire and not to be judged or punished. And thats where my point of the story comes from. Do what you want, follow your dream and wear what you want.” – Tala Raassi Fashion never really used to mean much to me until l met a young designer, Tala Raassi. She grew up in Tehran, the capital of Iran, where women don’t always have a choice in what they wear. During a swimwear fitting I asked her the reason behind her career and how she came to be a designer and work in the world of Fashion. At 16 years old, Tala was invited to a house party with her friends. What should have been a fun and very normal experience for any teenager was something that changed Tala’s life forever. Not long into the evening, Government officials stormed into the house and arrested her alongside other guests. In Tahran, being uncovered as a women around the opposite sex was unacceptable so she was thrown into jail for 5 nights then sentenced to 40 lashes, across her back, because she was wearing a skirt and a t-shirt. It was through this experience that Tala realised that fashion is freedom. Being able to chose what you want to wear as a woman is a freedom that not all women have access to. From the day I met Tala my lack of thought and care for fashion grew into a strong passion. I am proud to work in the fashion industry and promote self expression and freedom of choice. Every day that I get I up I am grateful that I can chose whatever the hell I want to wear without the fear of punishment or violence or imprisonment. Tala, Thank you for opening my eyes to how important fashion and the freedom of choice is for all women!! ???????? Pic @aplphotography

“Freedom of choice is for all women,” she stressed, explaining that self expression shouldn’t be punished. Amen.

You can check out the rest of the red carpet carnage here: