Emergency services have been dealing with the once-in-50-years storm that hit South Australia and sent the entire state into a blackout, and the anti-renewable energy crowd spared not one moment diving in to make a completely deranged political point.

One Nation Senator Malcolm Roberts, who believes the UN is to blame for everything from economic failure to when he lost his car keys on Monday, dove into the fray immediately.

I call on South Australia and the country to urgently exit all climate change policies that are the direct cause of this huge mess in SA https://t.co/QxKWo3Dwsx

The fact that over 40% of SA’s energy requirements are generated by renewable sources like wind and solar has arced people up, who argue that this would not have happened if it was still working off good ole reliable coal power. Nick Xenophon has called for an inquiry, and the Daily Mail have run with the headline blaming the Greens. 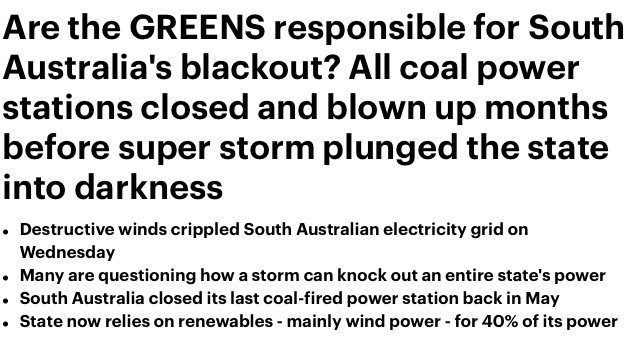 Even Josh Frydenberg, the Energy Minister in a government which clearly does not hold a candle for renewable energy, pointed out that the primary cause of the statewide blackout might have had something to do with the fact that there were 100km/h winds and around 80,000 lightning strikes. You know, that old chestnut.

Tony Wood, who authored a study for the Grattan Institute criticising the effect of renewable energy reliance on the state’s power prices, says that the power failure was more to do with the storm than anything else. I know, shocking. “My understanding, at least at the moment, is there’s no evidence to suggest these two issues are related,” Mr Wood said.

“There’s no evidence to suggest this was caused by too much wind power, or the dependence on wind power, or anything else, or would’ve been any different if any of the power stations that had been shut down earlier this year had still been operating.

Labor’s assistant assistant spokesman for climate change, Pat Conroy, told the ABC that there’s no real evidence that coal power would have saved the state from the storm.

“The South Australian Government has made the point that even if the coal-fired power station that was recently closed down was still operating, it would not have been able to supply power to the state,” he said.

It strikes me that this might be a lesson learned in the area of disaster preparedness and energy network redundancy, rather than one about renewables. Sounds like coal would not have saved SA.