Is This Australia’s Most Fucked Up Tinder Profile Pic?

Watching the ad for the new ‘Stop.Think.Respect’ series, more than a few us here at the PEDESTRIAN.TV office were tearing up. The campaign is a heart-wrenching reminder of how Indigenous Australians continue to face racism every day.

Then, less than a day later, we had a picture brought to our attention. A screenshot from Tinder of two young Australians dressed in this: 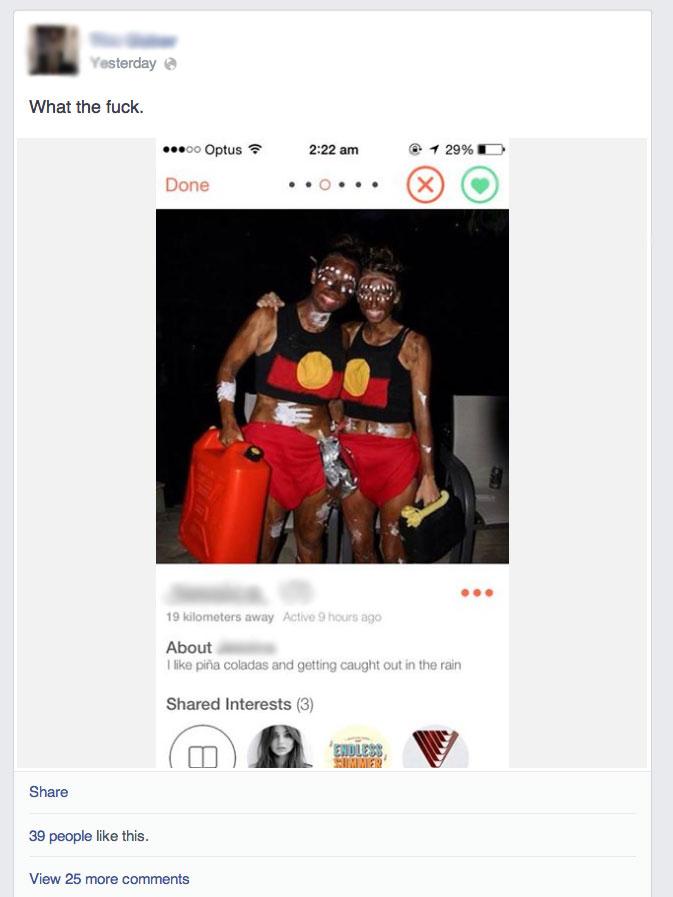 We spoke about not putting it up – because, gross – so as not to create a circle jerk of outrage against two people who should know better but clearly don’t. It’s on Tinder, it’s public but we didn’t feel entirely comfortable giving the signal a boost.

But, ultimately, the discomfort born from the content of the picture greatly outweighed all of that. Seeing, in .jpeg form, irrefutable proof that Australians still don’t.get.it. made us think it was worth sharing because in our country people clearly do not always Stop.Think.Respect.

Racism is a learned behaviour. It has been observed and perpetuated in Australian culture. It was born from ignorance, from a time when European settlers came upon an unknown Indigenous peoples, a group whose culture, values and physical appearance they did not know, did not understand. There’s only so long we can use lack of understanding and plead ignorance, though. The fact that two people, in the year 2014, thought it was okay to dress like this – presumably for a dress-up party – and that one of them thought putting this as their profile picture on a public dating site created a fair and accurate representation of them as a person is beyond mind-boggling.

People like this have been reinforced. Every time someone laughed at a joke with some kind of ‘petrol sniffing’ derivative et cetera they have been encouraged. Learned behaviour, unlike innate behaviour, is something we choose to learn. There are motivating factors behind this kind of behaviour and that is what we need to change about our culture. Being around people who are racist isn’t going to make you racist. There is a cure. And that cure is knowing fucking better.

We as a nation are taught to celebrate a day that marks the arrival of the ‘First Fleet’ and the beginning of wars, slaughter and genocide waged against Indigenous Australians. We forget the battles fought, like the Australian frontier wars, the courageous Indigenous leaders, like Windradyne, and how systematically disadvantaged and persecuted our fellow Australians have been.

Let’s forget about other countries. Let’s not compare ourselves to other places to see if we really are the most racist and decide that maybe we’re not and so, maybe, we’re going to be okay. Let’s just focus on us and making our beautiful country reflect its beauty inside and out.

No, people are not being oppressed if their racist jokes are called racist, if they can’t wear Native American headdresses without being told it’s disrespectful or if they’re asked not to use the word ‘Abo.’ By avoiding all of that shit we’re being empathetic, aware and displaying some of that famous Australian mateship towards our fellow Aussies.