Hooray For Science! A Monkey Has Been Observed Trying To Fuck A Deer

It’s a big, big day for science, folks: a male snow monkey has been observed attempting to fuck a female sika deer, and it’s apparently a big breakthrough for those studying the niche field of interspecies fucking.

The failed coupling is only the second recording example of ~sexual relations~ between two distantly related species. Snow monkeys and sika deer, found on Japan’s Yakushima Island, usually keep their relationship to the ‘just friends’ stage. The deer eat the fruit the monkeys drop from the trees, and the monkeys ride around on the deers’ backs. Nice, casual, non-sexual fun.

But one particularly toey male primate decided he wanted more. 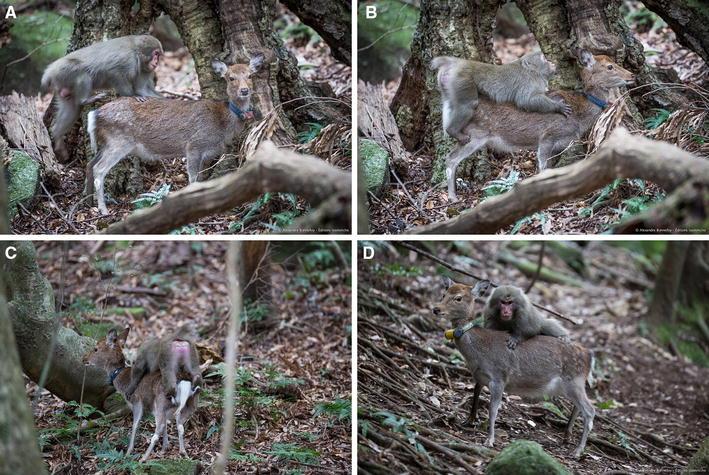 From the scientific journal ‘Primates‘, where this paper was published:

“The male mounted the deer and displayed some copulation behaviours (about 15 movements over a period of 10 s) before dismounting. No penetration occurred (the penis of the macaque was not directed at the genital area, but at the back of the sika deer), probably due to differences in morphology/size. However, ejaculation seemed to occur as the deer was seen licking the seminal liquid after the mount.”

Deer #2 was none-too-keen on being Deer #1’s sloppy seconds.

“The male then attempted to mount another female deer that did not accept the sexual behaviour as she attempted to escape/remove the macaque by moving, increasing her speed, turning around and displaying threats.”

According to researchers, the monkey attempted to fuck a deer every four-to-five minutes for the hour they watched him. You might have been toey, but have you ever been ‘try to fuck another species twelve to fifteen times in an hour’ toey? Hopefully not.

Researchers reckon the most likely explanation for this highly unusual behaviour is that there just aren’t enough of those darn lady monkeys for the man monkey to be satisfied. Other possible explanations include ‘the monkey was learning how to fuck’, but that’s highly unlikely. (Author’s note: considering the monkey spunked on the deer’s back, maybe fucking lessons wouldn’t go astray.)

The only other time in history that heterospecific inter-species sexual activity has been observed in the wild was when an Antarctic fur seal sexually harassed a number of king penguins. Afterwards, he finished off this fuccboi behaviour by eating a couple of them.

Attenborough, eat your heart out.