At 9:15 am on October 21, 1966, the Welsh village of Aberfan was struck by 110,000 cubic meters of coal mining waste after heavy rainfall caused a tip positioned above the village to become unstable, descending down the mountain slope in a landslide that engulfed a primary school, a secondary school, and a number of houses. 144 people died, 116 of them children.

In the wake of the disaster, Aberfan was visited by a psychiatrist from the area named Dr John Barker. Struck by the tragedy of the occurrence, Barker became convinced of the idea that it was likely that people would have had premonitions that something terrible was going to happen, and asked the Evening Standard to solicit letters from readers who had either had premonitions about the events themselves or knew someone that had.

According to the book Paranormality by Richard Wiseman, Barker received a number of letters from across England and Wales from people claiming to have had visions of something similar happening in the future, half of them in dreams. From the book:

One of the most striking experiences was submitted by the parents of a ten-year-old child who perished in the tragedy. The day before the landslide their daughter described dreaming about trying to go to school, but said that there was ‘no school there’ because ‘something black had come down all over it’.

In another example, Mrs M.H., a 54-year-old woman from Barnstaple, said that the night before the tragedy she had dreamed that a group of children were trapped in a rectangular room. In her dream, the end of the room was blocked by several wooden bars and the children were trying to climb over the bars. Mrs M.H. was sufficiently worried by the dream to telephone her son and daughter-in-law, and tell them to take special care of their two small daughters.

Of the 76 responses Barker claims to have received, he found 24 to possess ‘sufficient corroboration’. These he ranked in order of how much evidence he deemed them to provide in favour of precognition, publishing his findings in the 44th volume of the British Journal of the Society for Psychic Research as a paper titled Premonitions of the Aberfan Disaster.

This ‘discovery’ prompted Barker to found the British Premonitions Bureau in 1967, an institution to which people could submit visions or dreams that they believed to be of future events. The purpose of the bureau, in Barker’s eyes, was two-fold: to determine how often these things turned out to be accurate, and to act as something of an early warning system for future disasters.

A year later in 1968, Robert Nelson, at that time an executive at the New York Times, founded the Central Premonitions Registry in New York. According to the Encyclopedia of Prophecy by Geoffrey Ashe, Nelson surveyed his results after receiving and cataloguing some 5000 predictions, determining only 50 of them to have actually come to pass. Ashe takes care to note that half of those 50 hits came from only 5 people, who each made more than one accurate ‘prediction’. (Bonus fact: One of the predictions recorded was that a new breed of dog would become popular because it looked like Ronald Reagan.) 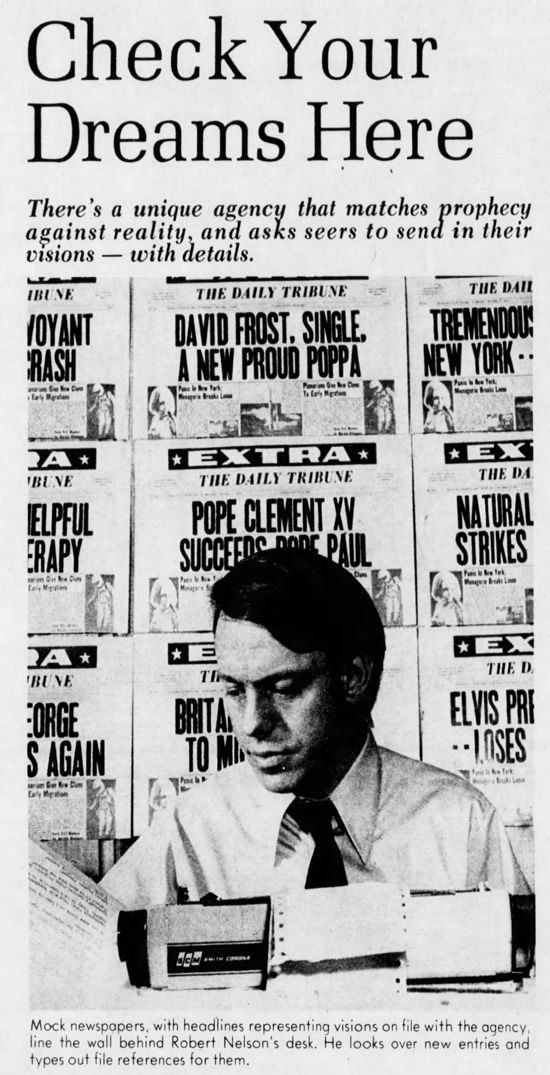 Pictured: A clipping from the March 18, 1973 edition of the Cincinnati Enquirer.

Both the British Premonitions Bureau and the Central Premonitions Registry eventually died off, seemingly unable to turn people’s dreams into an effective way of forecasting future disasters. But other attempts at similar projects have sprung up in their place, especially with the internet taking out a lot of the legwork of having to physically send, receive, and file written premonitions.

First appearing online presumably sometime around 1995 (according to the Wayback Machine) was a site called the Central Premonitions Registry, bearing no apparent relation to the original one set up in New York. From its own description, the site was founded and maintained by Yaron Mayer, a “psychologist with an extensive background in the area of serious scientific ESP research“. Serious indeed. The site gave users the option to submit their premonitions and also to submit reports on whether or not those premonitions were fulfilled. The site also promised to send the premonitions on to “the relevant News groups” if they received an influx about a particular event. Whether or not any tragedy was prevented by this website is, as yet, unclear.

Much like how Barker’s Bureau was set up in direct response to the Aberfan tragedy, a group called the Intuition Network set up their ‘premonitions registry’ just a week after 9/11. It took the form of a Yahoo! Group (remember those?) which is very much still online, although only five messages have been posted in there this year. Much like the others, while it was partially intended to serve as a way to test the concept of premonitions, it was largely meant to serve as an early warning system.

The premonitions registry from UK Psychics also seems to serve the same purpose, with a lot of the premonitions taking a pretty terrorism-oriented bent:

I am not really sure what to make of this one, but I get a very strong suggestion that someone is taking the piss, given that that is Zak Martin posting on his own website and can probably make up whatever dates:

So far, it seems like we haven’t quite come up with a reliable system for harnessing the definitely real power of the human brain to predict the future, but just you wait until some Silicon Valley weirdo makes an app of it.