Havaianas Confirmed The Actual Colour Of Those Thongs & ARE THEY KIDDING

My first reaction when I saw that that dress was back in the news was a deeply felt and immediate “fuck you”, directed at the cruel universe that gave us these inconsistent and easily tricked brains. If I wanted to have an existential crisis about how all perception is subjective and you can’t really trust what your eyes tell you, I’d drop acid and stare at my hands for 8 hours – I don’t need the internet to do that for me. If you don’t remember the last time this happened, civilisation collapsed because it turned out people saw one dress as two wildly different colour schemes along what seemed like a pretty even split. Some smarter people than me at Wired wrote a pretty good explainer on the science behind this crazy nonsense.

But, here we are again, this time the human race is being torn asunder by a pair of thongs, after a woman posted a picture of them to Twitter captioned “Que cor vocês tão vendo?” (“Which colour do you see?” in Portuguese). 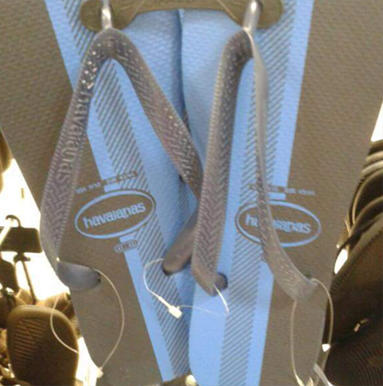 Last time I had the ultimate joy of being on the CORRECT side, seeing the dress for what it really is (blue and black) and I assumed that this correctness would carry forward for all similar cases – but apparently that’s not true.

P.TV reached out to Havaianas, the ubiquitous coastal footwear giant who are apparently to blame for this mess, who confirmed to us that the thongs are in fact *drumroll* blue and, uh, other blue. According to their helpful spokesperson:

“The thong gods have answered your prayers and we are putting the great thong debate of 2016 to bed… Havaianas have confirmed the official colouring is navy blue and blue.”

This is deeply disrespectful, as we all know the only one and true thong god is Sisqo, but it’s nice to have it cleared up nonetheless.

In my defence, I was only very slightly wrong, but I suddenly know a bit what it feels like to be one of those freaks / weirdos who saw them as white and gold (just kidding, I’m sure you’re all otherwise completely normal people).