Last Monday night, a man was shopping in Woolworths. Nothing unusual about that.

What made this shopping experience unusual – in fact, downright extraordinary – was the fact that he spotting his dream girl over in the fresh produce section at precisely 7:30pm, perusing the mushroom selection.

She had long brown hair and was wearing white shorts, and we know this because the man took a fucking photo and let his friend then post it on Woolies’ Facebook page.

Creepy, no? Not according to the Woolies’ social media team, who seem to deal exclusively in puns in the hope of going viral. 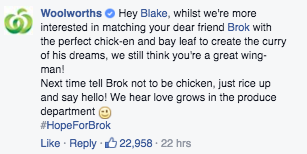 Well, it did. As you can see from that screenshot, their response has been liked almost 23,000 times, and the original Facebook post has been shared over 3,000 times.

During that time, Brok (the thirsty dude) and Blake (his mate who posted the photo) continued to engage with the post, updating everyone following it on Brok’s unsuccessful attempts to get the girl. 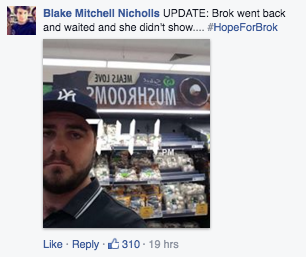 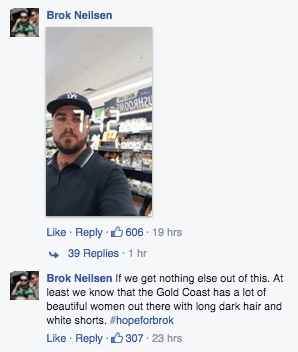 The story got picked up by Nine News this morning (and later the Australian Women’s Weekly and the Daily Mail), which of course only accelerated the virality of the thing.

This resulted in a number of people calling out the dude, Woolies, and Nine for encouraging what many people are saying is essentially cyberstalking.

.@9NewsAUS why are you and Woolworths encouraging cyberstalking? https://t.co/QXHUJwOddH?

This is bordering on sexual harassment. How is she the girl of your dreams if you didn’t speak to her, mate? https://t.co/wBY8bKXhlP

This is not the way to interact with other human beings #MYOtherHatIsAFedorahttps://t.co/SRomWBmPWH

This is just demented and creepy. https://t.co/fTSH8T6Ch7

Hi @woolworths and @Channel9 if a stalker asks you to find their victim for them you are supposed to call the police not put them on TV.

But wait, it gets better!

This afternoon, Nine got in contact with Brok to see if he’d had any success in finding his dream girl (no) and how he was dealing with being a “social media sensation”.

“I feel sick, honestly,” he said of all the attention. “I’m literally sitting here on my laptop, I’ve still got to work and I am constantly getting messages.”

They also spoke to Blake, who told them Brok’s been single for two to three years. Shocker.

Brok has promised to return every night at 7:38pm to the mushroom section, but tbh, we don’t like your chances.

Lemme assure you that mushroom buying gal on the Gold Coast won’t be turning up to Woolies at 7.38pm OR EVER AGAIN – she now shops at Coles.