In support of the Global Climate Strike – a week of action to demand climate justice, from September 20 to 27 – Pedestrian Group is doubling down on content that educates and empowers you to do your bit for our planet. Click here to learn more about the global movement fighting for our future.

Twitter’s a terrible, godawful cesspit of bullshit that I cannot bring myself to leave at the best of times, but even the bravest of posters knows never to goad a teen into a tit-for-tat. You’ll never win. You’ll look old as fuck. They’ll smother you with a pillow and think nothing of it. To that end, Greta Thunberg has gone deeply shady in firing the final shot in her on-going stoush with US grandfather Donald Trump.

Trump yesterday took a rather thinly-veiled swing at both Thunberg and, apparently, the desire of young people to live their lives on a planet not consistently on fire.

The rather odd swing on Trump’s far-too-active Twitter profile stopped short of biting on the various other conservative attack dog echo points being made against Thunberg, most of which revolve around either accusations of mental illness or parental exploitation through to outright childish insult and threats of violence against the, and I stress this loudly, sixteen-year-old girl. Still, there’s a fair gap in between the words President Fuckwit did wind up using.

She seems like a very happy young girl looking forward to a bright and wonderful future. So nice to see! https://t.co/1tQG6QcVKO

I know if I were the elected President of the United States, one of my top priorities would be spending ten hours a day being a pissy bitch on the internet.

READ MORE
This 73 Y.O. Grandfather Made A Heartwarming Comment About Greta Thunberg

Thunberg, however, turned that malarky on its head earlier this morning by very subtly taking a pot shot via, of all things, her Twitter bio.

The teen wunderkind quietly changed the bio overnight, and it’s one hell of a killshot. 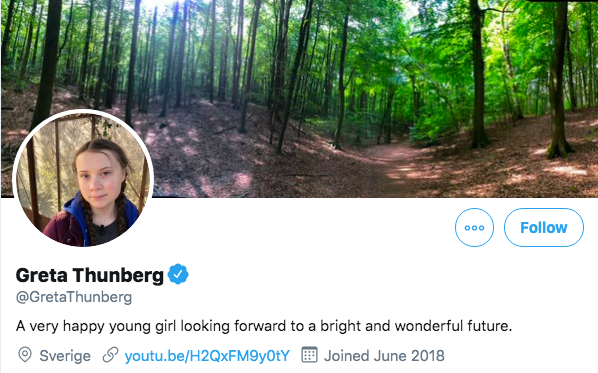 You can’t come back from that, as far as Trump goes. He’s the President. What’s he gonna do, change his Twitter bio to “45th US President who has a stinky butt”? Can’t be done.

READ MORE
US Pollies Pull Their Finger Out, File Impeachment Inquiry Against Trump