Someone Made A Gladys-Themed Flappy Bird Game And Yes, It’s Just As Hard As This Lockdown

Glady Bird is a new browser game made by Melbourne-based software developer Tyler Hamilton. It replaces the little bird from the viral mobile game with a pixelated tiny version of the NSW Premier in a red blazer.

As Berejiklian, you avoid samples of COVID-19 and try to catch doses of the vaccine. Just like our country’s vaccine supply issues, Pfizer is worth more than AstraZeneca here—five points for Pfizer, one point for AstraZeneca.

When you touch a sample of COVID-19 or the ground, you’re met with an appropriately pixelated version of a disappointed Gladys Berejiklian. Oh, and if you survive long enough, you have to try to dodge NSW Minister for Health Brad Hazzard‘s giant laser eyes, too. 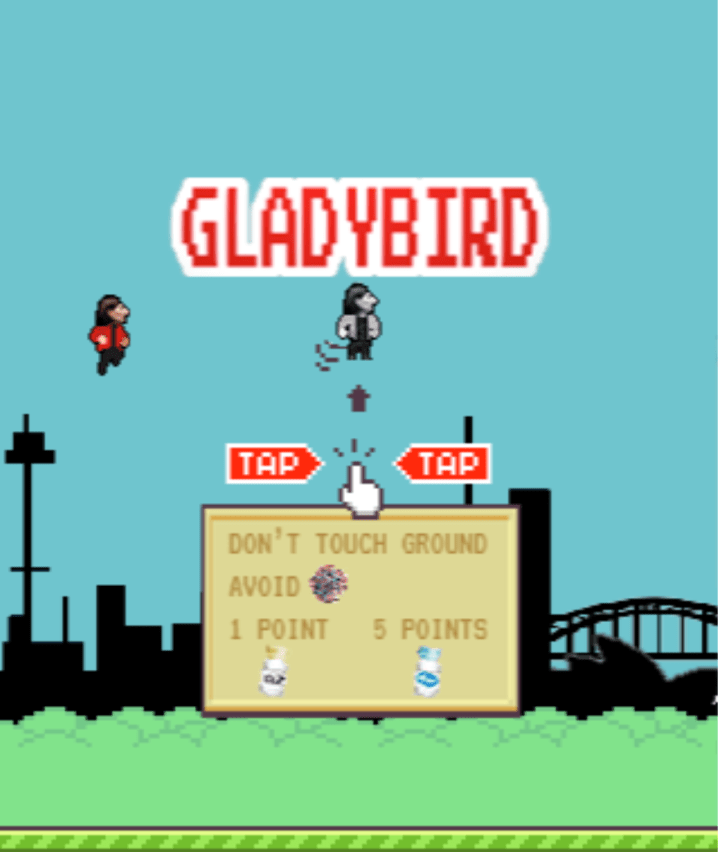 Just like Flappy Bird and our current lockdown situation, Gladdy Bird is hard. Maybe I’m a fake gamer boy but I can barely get to a triple-digit score.

As one player commented on a Reddit post about the game: “I keep crashing and burning right after the starting line, so I guess I’m having a pretty authentic experience.”

Speaking with PEDESTRIAN.TV, Hamilton said, citing his previous Simpsons deep-fakes of Aussie politicians and an AI of Victoria Premier Dan Andrews: “I find satire to be the best way for me to deal with big political moments.

“I wanted to do one based on Gladys trying to secure more vaccines to help curb the latest outbreak. I tried a couple of variations, but when I got to Glady Bird I knew that was the one and rolled with it.”

It’s not all pure satire, however. To help the people of NSW who are struggling right now, Hamilton added a donation link to NSW Foodbank on the game’s start screen. He said that while there have been almost 200,000 unique users experiencing Glady Bird, there have also been over 100,000 click-throughs to the foodbank donation portal.

“I usually do these projects because they’re funny, and I know they’ll make someone’s lockdown a bit lighter, but this time I really wanted to include a charity aspect of it due to how serious the situation is getting, and I find the donate call to action really effective for these projects,” he told us.

Hamilton added that while he has made a site that tracks when Australia last saw Prime Minister Scott Morrison, he hopes to gamify it somehow, potentially as a Where’s Wally-like game.

“[I] was thinking of expanding it because of how popular this game got.”

As a random aside, does anyone remember that game where you had to dodge shirtless clones of former onion-eating Prime Minister Tony Abbott? My sleep cycle and I wish I didn’t.

This isn’t the first time art imitated life with NSW Premier Gladys Berejiklian. Earlier into the Greater Sydney lockdown, somebody started up a Gladys Berejiklian fan art Instagram page, and others on TikTok are regrettably stanning Gladys as a political girlboss.