It is goofy as hell to be 28 years old and to still have a favourite animal but here I am: exuberantly telling you that my favourite animal is the giant squid, and that the body of one washed up on a beach on Wellington‘s South Coast yesterday.

The giant squid is the second-largest living cephalopod (the colossal squid has shorter tentacles but a broader, heavier mantle) and is, as the name would imply, giant. Estimates suggest that they could grow anywhere up to as long as 13 metres, which is somewhere around eight times longer than you are lying down.

In addition to being big as a motherfucker, these tentacle-abundant bastards are shy as hell — or, at least, their deep water habitat mostly puts them safely away from the prying eyes of human beings. There have been semi-frequent sightings of them throughout history and they have a tendency to crop up in the guts of dead sperm whales every now and then, but we didn’t manage to photograph one in its natural habitat until 2004, and didn’t manage to get video of one in its natural habitat until only 2012.

We’re at the point now where scientists aren’t as manically thrilled every time the body of one washes up on a beach somewhere, but I sure am, because look at this beautiful beast:

According to Stuff, the squid measures about 4.5 metres in length, which is on the small side for a giant squid but still pretty big for a squid, if you think about it.

A spokesperson for the Department of Conservation told Stuff that giant squid corpses like this washing up is “not common” but also “not rare” and that its relatively small size meant that there would be no point keeping it for study. 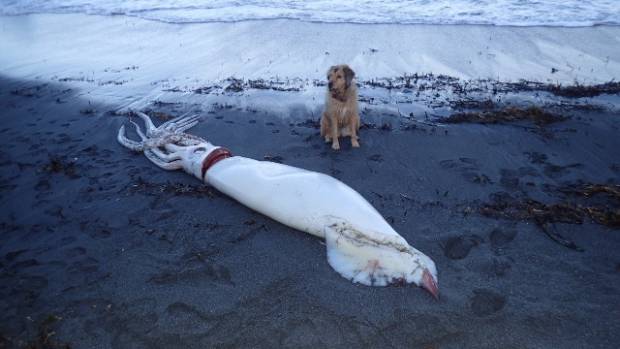 How bloody good are squids.