Libyan dictator Muammar Gaddafi has been confirmed dead and the internet has the photos to prove it.

As News Week pointed out, the end of his terrible reign will also herald the end of terrible spelling confusion. Kaddafi? Qaddafi? Gathafi? His name is alleged to have 112 possible spelling variations.

Somewhat Topical eCards even made an eCard to commemorate the moment: 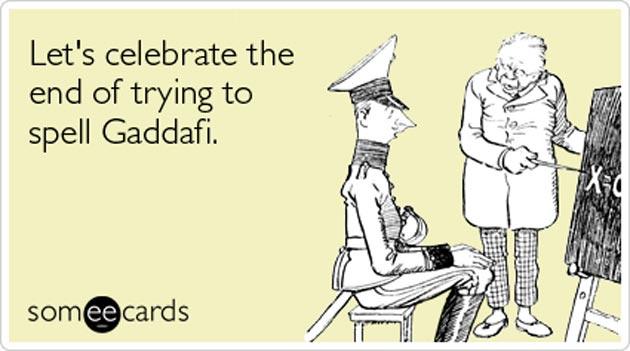 In a weird popculture aside the Hollywood Reporter discovered this weird divination of the colonel’s death in failed Eighties’ sitcom Second Chance starring Matthew Perry. The pilot episode included a scene where Gadhafi dies on July 29, 2011 – pretty close, eh Nostradamus.