If you could read the American highway, you’d find ‘defiance’ writ in bitumen.

Roads course south through the ancient pines of the Pacific Northwest. They meet the Golden Gate Bridge, itself proving the USA’s refusal to be bound by something so meek as the ocean. Leading south-east, the Mojave Desert‘s black arteries are the only difference between that blistered expanse and the surface of Mars. Turn away, back to the coast, and all paths lead to Los Angeles: a city made for, and made by, the automobile.

I know this because I visited the States last year. And I took the train. 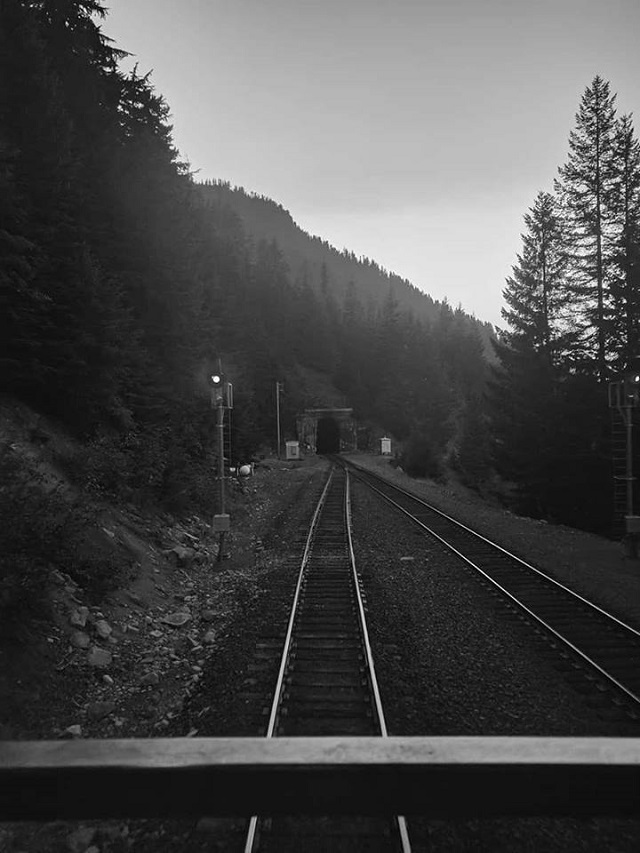 Not for the whole trip, mind you. Just the vast majority. Boarding passes for short-haul and a fistful of depleted bus tickets connect the dots. They speak a truth I’ve left largely unspoken: driving is not my bag. My feet hadn’t met a pedal since selling my dinky hatchback in 2015. Driving there, the car’s spiritual homeland, home to 300 million perpetually moving from someplace to someplace else, seemed an avoidable catastrophe.

The trip gave me an appreciation of AmTrak, sure, but I knew I’d chosen the comfort zone over the crumple zone. And that’s all I could think about when I opened an unexpected email offering me the keys to a new Mustang. The knowledge I blew my chance to drive in America is also what kept me from handballing the week-long opportunity to a more qualified colleague. I had missed out on driving in the USA, but I told myself I could effectively drive the USA – at least its closest available analogue – right here.

My editor, God bless her, gave the go-ahead. Days later came a heads-up phone call, a low rumble, and a delightful Ford rep handing me the keys to Pony fuckin’ 82. 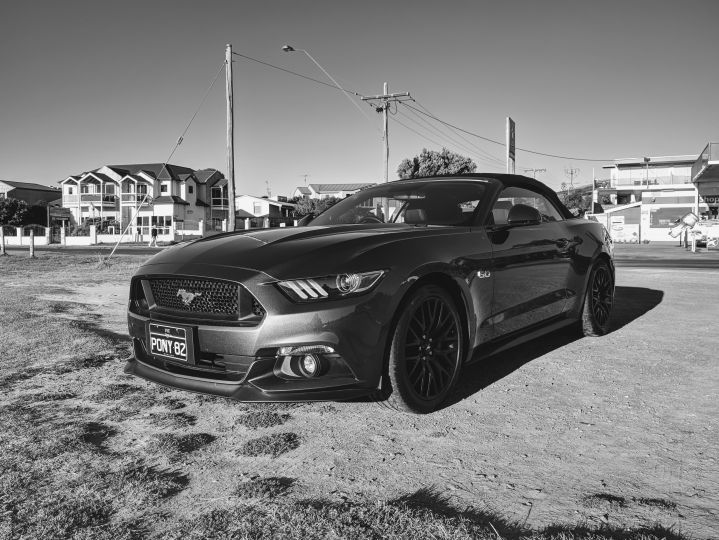 If you hadn’t already guessed, this write-up does not hold a technical run-down of the 2017 Ford Mustang GT Convertible. My first curbside chat with the representative was no more rigorous. Seeking some frame of reference for the make-believe vehicle in front of me, I asked what felt like reasonable questions: Premium unleaded, yes? What’s the optimum tyre pressure? And where are the forms I need to sign in case this all goes wrong?

My mate, present for whole exchange, flashed a knowing grin. Earlier, he’d laughed when I explained someone was entrusting me with a 5.0L V8, and he was right to do so. Once an honest-to-God automotive journalist, he knew exactly what the Mustang could do. He also knew exactly what I could do to it, because he was there when I rolled a four-wheel drive.

That sickening tilt. Sheet metal meeting dirt, rubber meeting air. Friends sprinting, yelling, as the engine finally stalled out. He’d been in the passenger seat. I remember staring up at him, dangling from the seatbelt. I’d looked past him, into open sky, as I shook the safety glass from my hair.

Years later, I was nodding at the Mustang. 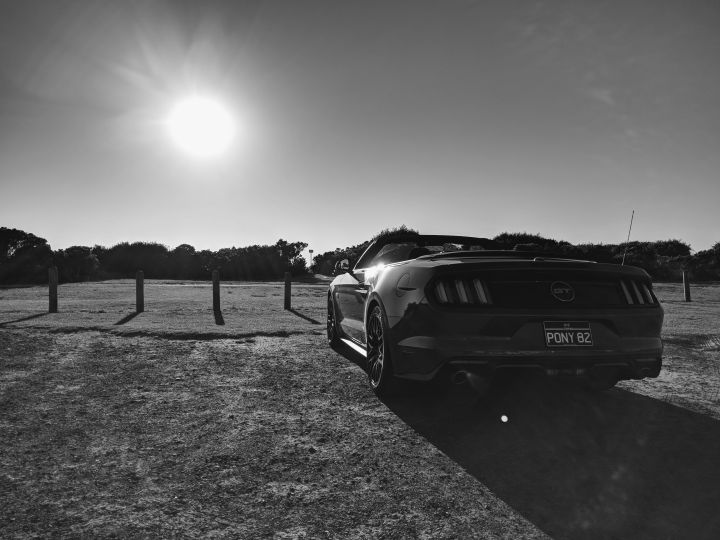 To call the resulting drive anything like a ‘spin’ actually feels disingenuous. A reacquaintance, maybe, to the concepts of braking and indication. Or an adjustment, to the car’s wide stance, its endless bonnet, and the fear of letting anything harder than coastal air scrape its metallic paintjob.

After one timid lap around the block, I dropped off my mate – unlike me, he has a real job, and can’t just hoof it into the sunset at a moment’s notice – and set off for the Great Ocean Road.

A seemingly interminable crawl out of Melbourne gave me a chance to learn the Mustang’s systems. I’d never driven a car with in-built GPS, but the dashboard screen capably pointed me to a motel in Apollo Bay. Bluetooth audio helped me blast a road trip playlist, sourced from colleagues better versed the art of getting the hell out of town. The roof even got a workout, but I wouldn’t necessarily recommend driving top-down in the haze of peak hour traffic.

Then, the roads cleared. The speed limits increased. And I took a first tentative stab at the accelerator. 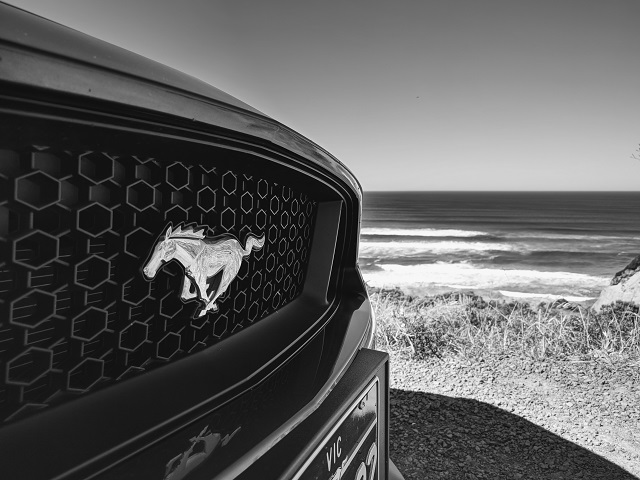 The Ford Mustang GT goes like stink. You’ll have to excuse my parlance here, but it just goes: In the car’s regular driving mode, there’s a split-second of lag between heavy pressure on the pedal and resultant thrust, almost as if the car wants to ask if you’re entirely sure about launching it towards the horizon. That lag does not exist in sports mode, as I discovered rounding the cliffs near Torquay. Those tires dig in, the nose juts forward, and the V8’s gurgle opens to a throaty roar.

Given my literal track record of wrecking vehicles belonging to other people, I thought it would take longer to reconcile with the car’s power. In truth, that first afternoon cruising down the coast was nearly all I needed. You don’t so much steer the Mustang as point it, like some kind of ballistic missile. Still, it’s a pretty spry projectile: before too long, the car was churning through corners, leaning into their banks, and shooting out the other side. The dense Otways foliage grew on the right as the ocean churned on the left. Ahead, more road to blast over.

A night in Apollo Bay turned into an early morning on the road. Veering west, forest canopy closed over the car. Mottled light hit the cabin: the top was well and truly down, and there was no intention to put it back up. I turned the Mustang down a narrow track towards a forest walk, and silenced its ridiculous rumble in green serenity. The trail cut opened to a clearing. From there, tracks snaked downwards, fern-covered and cool. A quiet stream ran under a footbridge and signs pointed to an enormous felled tree.

It was chill, but I had a feeling the car would only appreciate the sight in a few million years’ time: it’d take a couple of eons for the greenery to morph into crude oil. I didn’t have that kind of time, so I took off towards the Twelve Apostles.

Here’s a tip: you can actually skip the Twelve Apostles entirely if you stop at the beach a few kilometres east. Plus, you get views like this. 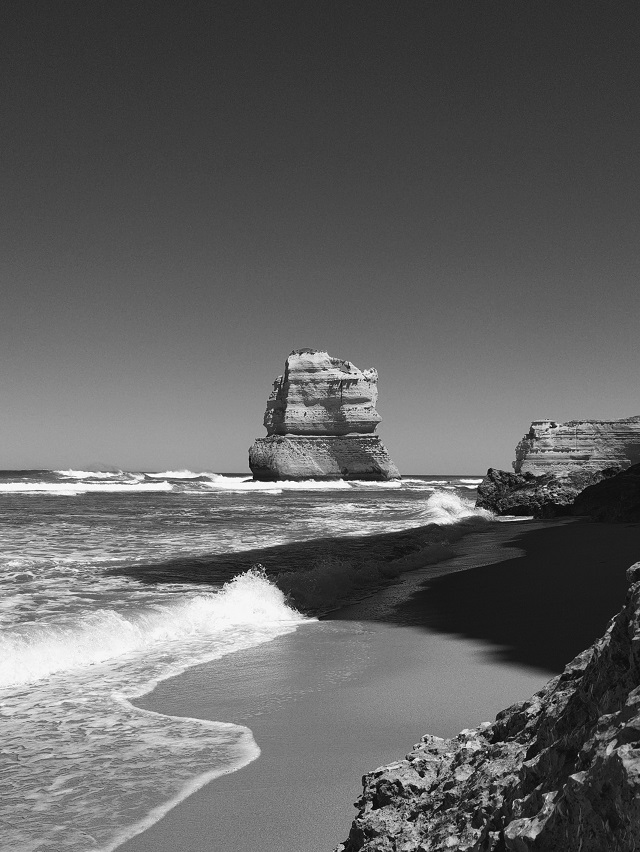 With my eyes permanently spoiled, I hoofed it for Port Fairy.

I arrived sunburnt, stinging for a beer, and perhaps a little worried I’d become too comfortable with the car’s nutso acceleratio. It had dawned on me I’d never driven a car with cruise control, and that trying to coax the Mustang down to acceptable speeds on long straights was more difficult than anticipated.

(At time of writing, I’ve received no correspondence from the lovely Ford team regarding any major traffic infractions. So.) 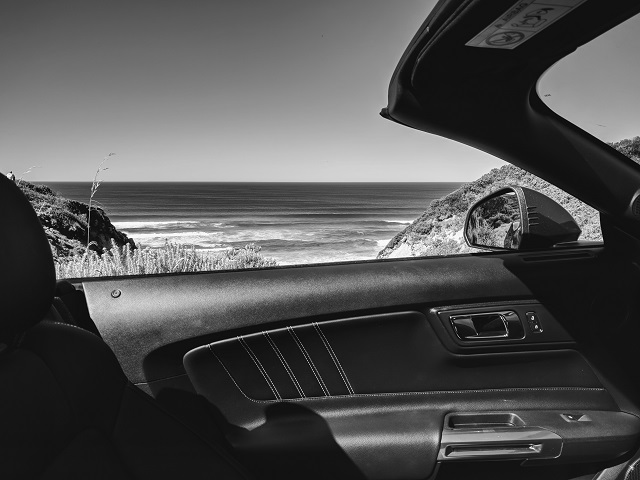 With the car parked, I wandered into the subdued town centre, and towards Griffiths Island. Standing on the lighthouse’s rocky outcrop, I got the feeling the journey was finally nearing road trip status. Somewhat stunned by the sight of a couple of tourists definitely about to root there behind the lighthouse, I slunk back into town to sink some pints. There was still another day to plan. 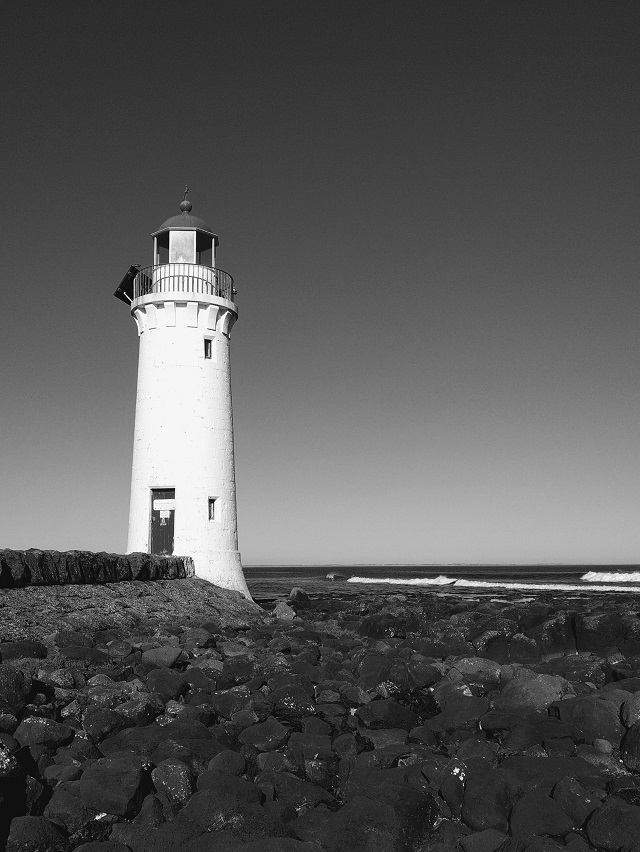 A commitment I’d made earlier back in Melbourne – which, in retrospect, clearly violated the spirit of the road trip – meant I’d need to be back in the thrum by nightfall. With 300 kilometres between me and home, I did what any writer with a license to cut sick would do. I pointed the Mustang towards Ballarat. Specifically, Sovereign Hill.

Another tip: unless you’re a six-year-old with a preternatural obsession with panning for gold, you can probably give it a miss. I only swung by to see if my feelings for the place had changed. After all, I squared away this trip, and my experience with the car, as some kind of grand reckoning with pained youthful memories. I only got as far as the entrance before that old-timey fiddle music sent me scuttling back to the car, proving not every memory could be paved over with the help of an American muscle car.

Nice architecture around, though. 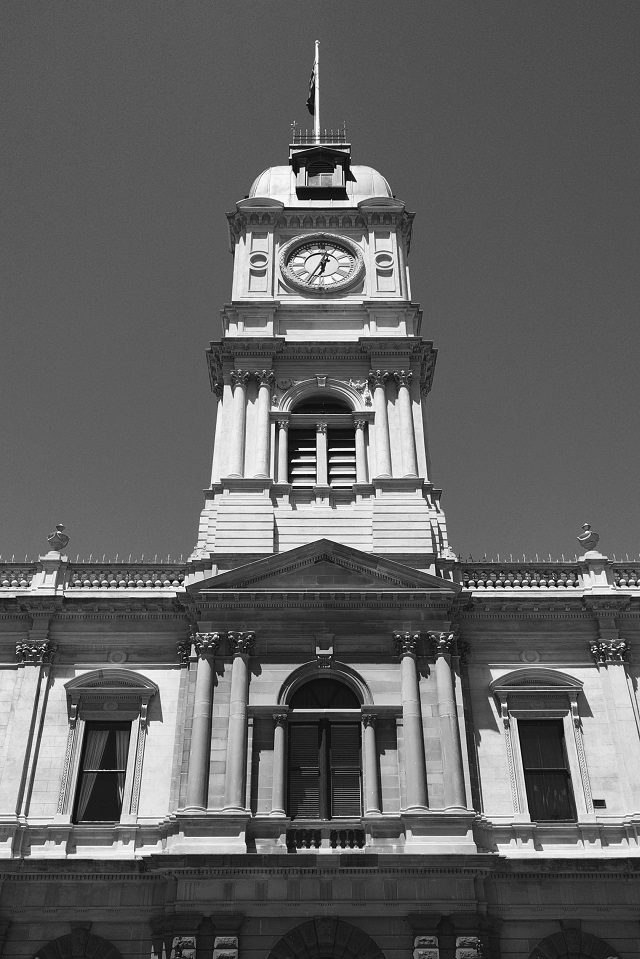 Back in Melbourne, I came to a few conclusions about the car. Firstly: it’s far too easy to drive. For all of its guts, all of the brawn, it still goes where you point it. The kick from the tyres is manageable. And fun. Bloody hell, it’s a fun car. And it’s that ease, that sense of familiarity, which stopped me from freezing of fear at the memory of toppling a four-wheel-drive down an embankment.

I get why you’d want to throw all 300kW into a roadtrip in Australia. I really do. And, given another opportunity to travel across US, I might just swing for something as brash, as ridiculous, as right as a gunmetal grey Mustang with the license plate Pony 82. 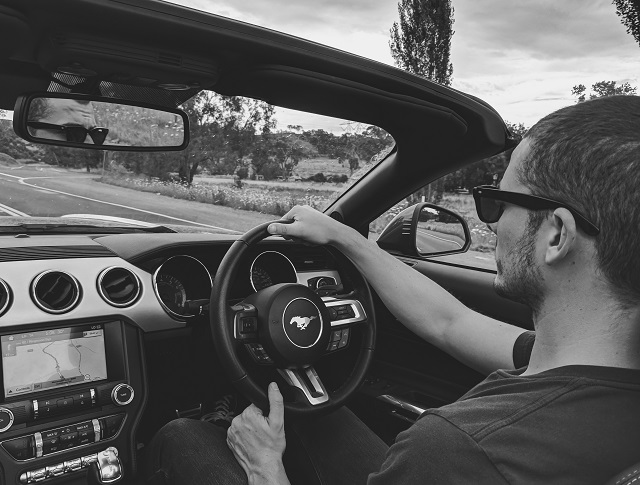 Full disclosure: this is not the first time Ford and PEDESTRIAN.TV have met. During a previous commercial partnership, the car-maker asked a blessed colleague of mine to ride shotgun in a Mustang while a professional driver cut sick.

While Ford offered me this car outside of any paid agreement, they did hope my impromptu road trip would inspire you to try one out for yourself. If you’re reading this, it’s probably the Easter long weekend; if you’d like your next days off accompanied by a stupid-fast muscle car, have a think about booking a test drive HERE.

By the way, I never told Ford about the four-wheel drive incident.

READ MORE
Where To Pause On The Hume Highway, The Most Boring Road To Ever Exist
READ MORE
Avoid Looking Like A Car Virgin W/ Our Tips 4 Buying Yr First Set Of Wheels