The 27-year-old Victorian footballer who fell into a coma after previously ingesting what was suspected to be ‘flakka’, Riki Stephens, has reportedly passed away in hospital.

Stephens had been in a coma for just under a week after a suspected drug overdose, and it’s understood that his family have decided to turn off his life support.

He had been staying on the Gold Coast, celebrating the end of the season with his team mates for the Heathcote Saints Football Club.

There was no trace of a-Pyrrolidinopentiophenone, known as ‘flakka‘, found in the man’s system.

The story of Stephens’ hospitalisation made headlines due to the fact that 16 separate drug overdoses, all thought to be caused by synthetic drug ‘flakka’, all occurred on the Gold Coast and Sunshine Coast on the same weekend.

As we said in our earlier article about this heartbreaking incident,

‘Though obviously there is a great deal of hysteria around flakka on the Gold Coast right now, there’s actually no concrete evidence that it was the notorious Florida street drug – it could have been a particularly potent batch of MDMA, for example.’

Regardless of the drug ingested, this is a very sad tale.

His team mates and loved ones have flooded his social media accounts with tributes and memorials of the young man’s life: 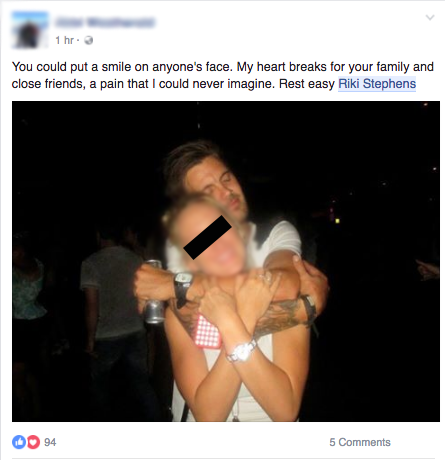 Our thoughts are with the Stephens family, and Riki‘s friends and teammates at this tragic time.