Yesterday afternoon, a pall of tragedy fell over The Melbourne Cup when one horse, Admire Rakti, died in the stalls after the race, and a second, Araldo, had to be euthanised after fracturing his leg when startled by a patron waving a flag.

The Sydney Morning Herald today report that the Victoria Racing Club and Racing Victoria, wary of such an incident happening again, have banned flags in horse areas for the remaining two events of this year’s spring racing carnival.

Racing Victoria chief steward Terry Bailey says that “security will be on hand” to prevent flags from entering areas near horses.

The Oaks, which takes place on Thursday, and The Emirates Stakes, on Saturday, will also dispense with the avenue of honour, through which horses are led past the crowd after their races.

While it seems unlikely that anyone would be stupid – or for that matter, malicious – enough to wave flags in horses’ faces a second time, it’s not totally outside the realms of possibility. 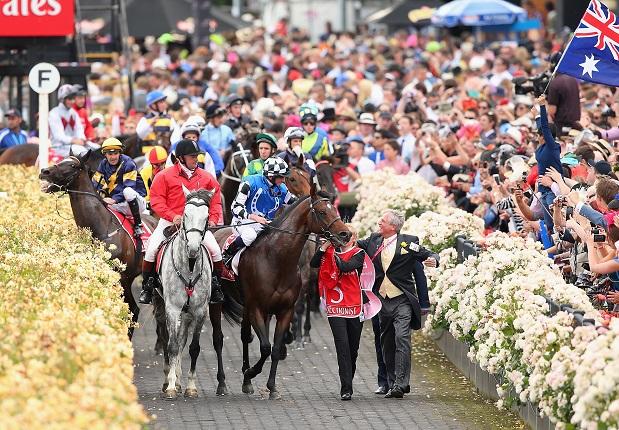 At the conclusion of yesterday’s race, Araldo was walking back towards his enclosure, past a crowd, when it is believed that he was “spooked” by a woman waving an Australian flag, and kicked a steel rail, fracturing his hind leg.

The woman waving the flag was being held in the air by her partner, who was named by Channel Seven earlier today. When confronted by other race goers, the man reportedly insisted that he attends the race every year, and was only “here to celebrate.”

This is the second year that a horse has died of a broken leg during or after The Melbourne Cup. Last year, Verema broke his leg in the back straight, and had to be euthanised.