Here’s a quick catch up on the US federal government (partial) shutdown: Federal funding bills require 60 out of 100 votes in the Senate to pass. There are 53 Republicans, 45 Democrats, and two independents in the Senate, which means that they require bipartisan support. Trump wants the equivalent of roughly $8 billion thrown in for the wall. The Democrats do not want to do that. It has now been 32 days since the standoff started, the longest (partial) shutdown in US history.

The shutdown has impacted roughly 800,000 federal employees, seeing anyone from food inspectors to NASA employees to Border Patrol agents to customs officers to Coast Guard crew to air traffic controllers forced to either work without pay or stay home (also without pay). National parks are filling with rubbish and toilet problems due to the absence of staff. Unpaid TSA workers have been calling in sick en masse. It is a right mess.

A new 72-page report issued by the FBI Agents Association has detailed how the shutdown has impacted their ability to operate, in a number of somewhat surprising ways. The report contains individual testimonies from FBI employees, detailing how they have been impacted by the shutdown.

One account in the report states that they have been unable to bribe informants or buy drugs:

Two days ago, our financial office advised that the division has exhausted [Organized Crime Drug Enforcement Task Force] operational funding. . . . We are in the middle of a critical OCDETF investigation targeting kilo-quantity trafficking of methamphetamine and heroin by street gang members. . . . Without money to pay sources and conduct controlled narcotics purchases, our task force is unable to continue these critical investigations.

A sentiment backed by other agents:

A [Resident Agency] has three criminal enterprises dealing illicit drugs, committing violent crimes, and various other criminal activities targeted. Unfortunately, we are going to be unable to conduct any controlled purchases of illicit drugs because the FBI and our partner…have no evidence purchase funds available.

Other agents were having similar problems with guns:

We don’t have funds for operations. We . . .  are unable to do undercover or [Confidential Human Source] operations that require using government funds to purchase narcotics or firearms from gang members, which is a method we use to get drugs and guns off the streets and to prosecute the violent gang and drug traffickers.

Another says that they have not been able to get the services of anyone who speaks Spanish and have been forced to resort to teleconferences:

I have been working a long term MS-13 investigation for over three years. We have indicted 23 MS-13 gang members for racketeering, murder in aid of racketeering, extortion, money laundering and weapons offenses (sic). . . . Since the shutdown, I have not had a Spanish speaker in the Division. We have several Spanish speaking informants. We are only able to communicate using a three way call with a linguist in another division.

Yet another said that not being able to bribe their informants now might see them gone forever:

Not being able to pay Confidential Human Sources risks losing them and the information they provide FOREVER. It is not a switch that we can turn on and off.

An agent in the FBI’s counterterrorism division said they can’t afford to train people to deal with weapons of mass destruction. Another said that they couldn’t afford to buy the SIM card they need to talk to someone with crucial information on global terrorism:

I am unable to buy the phone card that I use to recharge my ‘cold’ phone…to talk to a very valuable [Confidential Human Source] . . . [who] reports on domestic and international terrorism. The cold phone [is necessary] to avoid identification through subscriber information.

For some reason, the report is peppered with drawings purportedly drawn by children, which seems just a little bit insane (this one is in there twice, inexplicably): 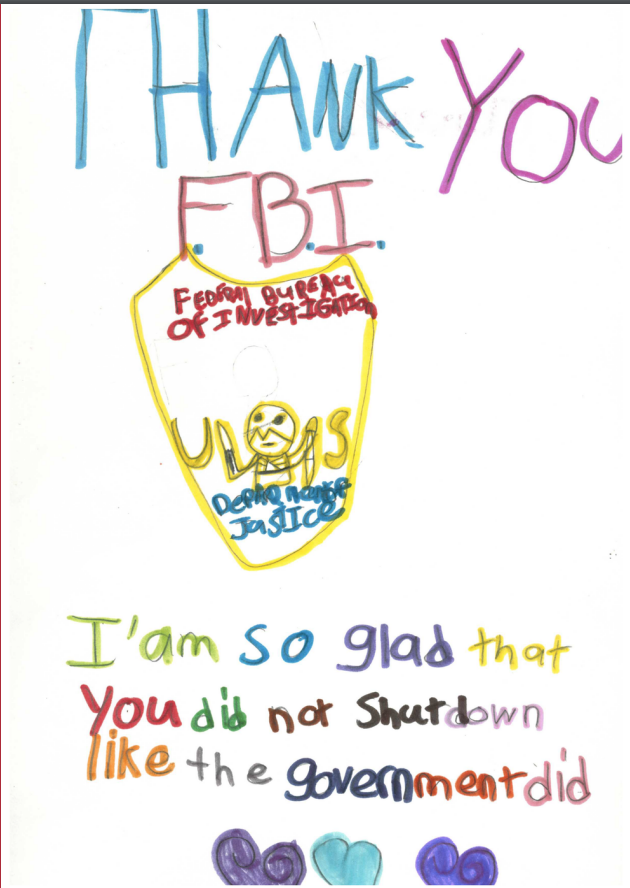