As the world continues to grieve the horrific Orlando massacre, the FBI and Justice Department has released full transcripts of phone conversations shooter Omar Mateen had with police during the three-hour rampage at Florida’s Pulse nightclub that claimed the lives of 49 innocent people.

There were a total of three calls between the homegrown terrorist and 911 dispatch, during which he spoke in Arabic and pledged his allegiance to Islamic State.

The FBI originally released partially edited transcripts, omitting Mateen’s statements about acting “in the name of God” to  “avoid revictimising those who went through this horror”, but backtracked after major backlash from top Republicans who demanded more transparency.

RT if you agree ? The Obama admin should release the full, unredacted transcript of the #Orlando shooter’s 911 call. pic.twitter.com/DAebXksTb7

Explaining why they bowed to pressure to release the full transcript of the conversation, the FBI said the redaction had “caused an unnecessary distraction from the hard work that the FBI and our law enforcement partners have been doing to investigate this heinous crime.”

“As much of this information had been previously reported, we have re-issued the complete transcript to include these references in order to provide the highest level of transparency possible under the circumstances,” a statement read.

Unlike the first-released transcripts, the new transcripts name Mateen as the shooter, and in it, he says: “My name is I pledge of allegiance to Abu Bakr al-Baghdadi of the Islamic State.”

Below are the redacted transcripts of the calls exchange with the police dispatcher: 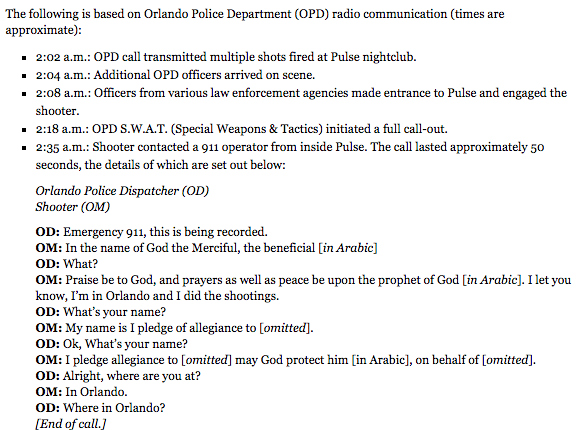 The FBI also released a timeline of the actions of police to rescue those still holed up inside Pulse. 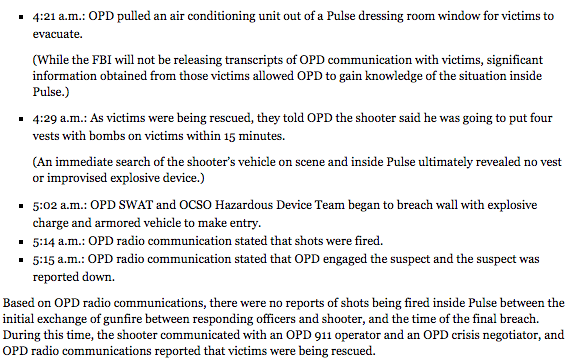 FBI Assistant Special Agent in Charge Ron Hopper said that, though no doubt in the public interest, the audio of the calls would remain under wraps out of respect to the victims and their grieving families.

“Yes the audio is compelling, but to expose that now would be excruciatingly painful to exploit in this way,” he said, adding: “While we’re not releasing the audio, what I can tell you is that while the killer made these murderous statements he did so in a chilling, calm, and deliberate manner.”