There are around 83 million fake Facebook accounts cruising around the ether, which means there’s a greater number of false Facebook profiles than the entire population of Australia multiplied three and a half times.

In a recent interview with CNN, Facebook’s chief security officer Joe Sullivan revealed that the social network has accumulated 83 million fake or duplicate accounts comprising close to 5 per cent of its total users.

But who is it that makes up these figures? Let me break it down…

DUPLICATE ACCOUNTS You can find me on Facebook twice. Why? In my confusion transitioning between Myspace (lol) and Facebook, I naively thought the two networking sites were based on the same principles of ‘friendship’ (i.e. the more random weirdos the merrier) and accepted every ‘friendship request’ that came my way, as well as sending plenty of my own… Once I cottoned on, I made a new profile for people I actually know, leaving the other floating in cyberspace so as not to offend my “friends” . Turns out millions of other people did the same thing!

PETS & THINGS THAT CAN’T TYPE So your dog’s cute? Does this really justify you spending double the amount of time you already waste staring blankly into cyber space, while involuntarily performing a sporadic and slower version of the chicken-dance hand gesture? Unless your pets ‘About’ section reads “My name is Boo. I am a dog. Life is good” and is genetically engineered to be the embodiment of cute, you should delete the account and take your pup out for a stroll instead. You are causing a major security problem for The Social Network. 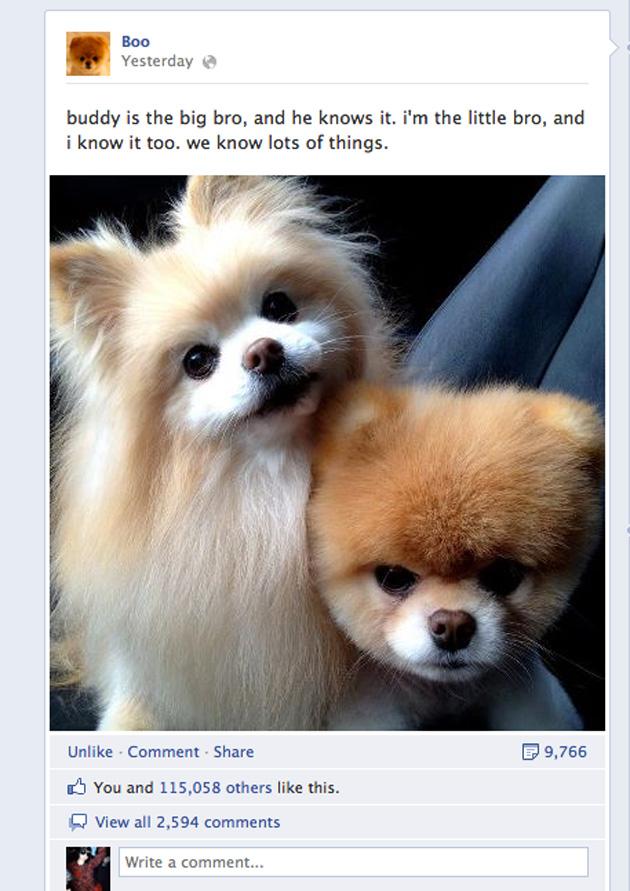 Obviously these accounts cause a problem – particularly when you consider claims by people like blogger Erik Larson who says that 90 per cent of the Facebook advertising clicks he receives come from fake accounts. It isn’t any wonder that Facebook executives are quitting and share prices are plummeting…

With that said, go ‘Like’ Boo the dog here. It will improve your life.