An Insane Profile Of Masterchef’s Jock Zonfrillo Is Going Viral: Here Are The Spicy Cliff Notes

A deep dive into MasterChef judge Jock Zonfrillo‘s life story was recently published in the Good Weekend, and it’s since gone viral for making several explosive claims that essentially call the chef out on his bullshit.

It’s shocking, it’s explosive, and more than that it raises questions about the celebrity chef. The article written by Tim Elliott alleges that parts of Zonfrillo’s recently published memoir Last Shot are contradicted by other chefs. From his crippling drug addiction to his relationship with esteemed chef Marco Pierre White, the article goes in and does not hold back.

Here are five of the most explosive claims made by the article, and be warned: you might need a drink for this.

1. Marco Pierre White wasn’t quite the father-figure that Zonfrillo makes him out to be

The MasterChef judge sings Marco Pierre White’s praises throughout his memoir, claiming they had a special relationship, “akin to a father and son.” However, White reckons “[he] never saw much of [Zonfrillo]”.

“He worked in my kitchen for a very short time,” White said.

In the book, Zonfrillo also makes claims that he was homeless when he met White and that it was the famous chef who helped him find accommodation. The Scottish-born chef also claims that White used to take him out fishing. However, Marco Pierre White has denied all of it.

“Jock is not a bad man,” White told Elliott over the phone. “He has a natural intellect and he’s very nice. The only problem is that almost everything he has written about me is untrue.”

2. “Drugs are a staple in Zonfrillo’s memoir” yet no one can confirm the extent of his drug use

The judge’s memoir, titled Last Shot, is named after the moment Jock Zonfrillo had his “last shot” of heroin in the toilets at Heathrow Airport.

“For 10 days I was vomiting and screaming and shitting all over the place before the fever finally broke,” Zonfrillo wrote in his memoir (which sure as hell sounds like a scene straight out of the movie Trainspotting).

Several co-workers over the years say they never saw Zonfrillo affected by drugs, including his former boss and head chef of Forty One Dietmar Sawyere.

“I have read several ‘bad boy’ articles about Jock over the last few years and his ‘fight with heroin’ etc… makes a good story but I saw no evidence of that while he worked for me side by side for 12 hours a day for a few years,” Sawyere told Elliott.

But Zonfrillo says he was skilled at concealing his habit, writing in his memoir: “I was very good at being a junkie.”

3. He was “fired” for setting an apprentice on fire

Another story mentioned in Zonfrillo’s wild memoir was one where he set his apprentice’s pants on fire, giving him severe burns for being too slow in the kitchen. He doesn’t deny this happened, but claims it was a practical joke, rather than, I don’t know… physical abuse?

“It was a couple of little burns on his finger,” Zonfrillo told Elliott when asked about the incident.

“But Krammer’s medical report at the time noted that he had suffered “extensive burns” and “excruciating pain”, and was unable to work for three-and-a-half months,” Elliott adds.

Jock Zonfrillo was promptly fired, but in previous reports, he has said he “walked away” because he couldn’t add native ingredients to the meals at Forty One. 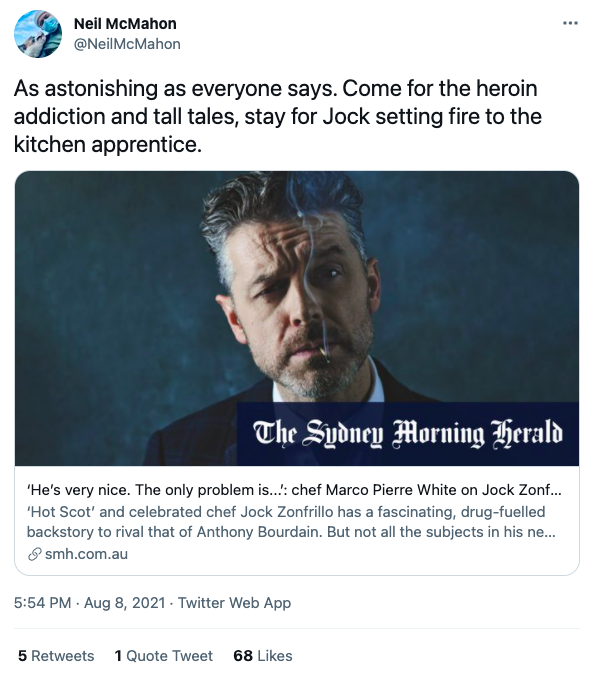 4. Zonfrillo ‘claims’ to have visited hundreds of Indigenous communities

Jock Zonfrillo’s restaurant Orana has received many accolades for its incorporation of native Australian ingredients into dishes. However, it’s the story of how the chef’s love for native Aussie food began that really baffles me.

Note the part below where the general manager of APY says the “first record of Zonfrillo visiting the APY was in 2015”, not way back in the early 2000s like he claims.

“Zonfrillo claims to have visited hundreds of Indigenous communities since then,” Elliott also writes.

5. Many of his restaurants could barely break even

Finally, Tim Elliott did some digging into Zonfrillo’s finances and discovered that many of his ‘successful’ restaurants had outstanding debts.

“By 2017, Zonfrillo was one of the most celebrated chefs in Australia, but Orana had yet to break even,” Elliott wrote.

I told you, you’d need a drink.

Simon & Schuster, which published Last Shot, has since released a statement to the Sydney Morning Herald, standing by Zonfrillo and the memoir.

The celebrity chef himself commented:

“This is the story of my life. I’ve lived every minute of it, the highs and lows, and I stand by it.”

“There’s no question that some of my book makes me look pretty unsavoury at the best of times.

“I carry the shame from those years, not pride, and it was a big obstacle for me to overcome when writing this book.”