One Nation and Mark Latham met each other at the perfect time in each of their lives. For One Nation, seeking legitimacy in the Australian political landscape, a former opposition leader and media figure like Latham represents precisely that legitimacy. For Latham, who can’t help but lose jobs constantly and was starting to scrape the bottom of the barrel for opportunities, One Nation represents the very bottom of that barrel.

Once the federal Labor leader, now state leader of One Nation’s NSW branch, there’s a fair chance Latham is having a somewhat difficult time adjusting to the realities of the party to which he has hitched his wagon. For instance, he probably thought that announcing a candidate for the seat of Hornsby that describes herself as a Muslim was a Machiavellian masterstroke — a strategic decision worthy of Alexander the Great himself. In reality, it has just really, really pissed off their ridiculous voters.

One Nation announced Emma Eros as their candidate for the seat in a press release yesterday, describing her as a “proud Australian Muslim woman” who is “married to an Australian plumber“, seemingly quite fixated on stressing her Australian-ness, for a reason we will probably never guess (just kidding). In an interview with big-time shithead Milo Yiannopoulos on his tour in 2017, Eros said that while she doesn’t regularly attend a mosque, she is still a practicing Muslim.

Judging from the response on One Nation’s social media platforms, the news of her candidacy was not received particularly well, to the point that Latham released a statement today decrying the reaction from the “Lunar-Right“:

I’m very proud that Emma is running for our party. She has more courage in her little finger than the Lunar-Right nutters attacking her, who deal in crazy conspiracy theories about Islam and weaken the chances of ever reforming this religion for the better.

The Lunar-Right nutters on Facebook have a wild conspiracy theory about Islam: that all Muslims, especially the moderate ones, are trying to trick us. When the Caliphate is called, someone like Emma Eros will cut my throat.

How crazy can these people be? Have they ever met a Muslim? Have they ever studied the diversity of the religion, whereby its different sects and factions fight each other to death (as in Iraq)?

I’m proud to count some of them as family friends. The idea they will answer the Caliphate and cut my throat is as crazy as Moon Landing and 9/11 conspiracies and other BS on social media.

In the statement, Latham is quite open about the utility of having someone like Eros spruik their message: “As a candidate, Emma is confirming that everything One Nation has said about Islam (such as on the Burqa, ethnic enclaves and terrorism etc) has been accurate. If I say these things as NSW Leader, the Left dismiss me as a white guy picking on Muslims. When Emma says it, it has credibility and power in the political debate – priceless for a party like ours.“

This statement, in turn, was not particularly well received either: 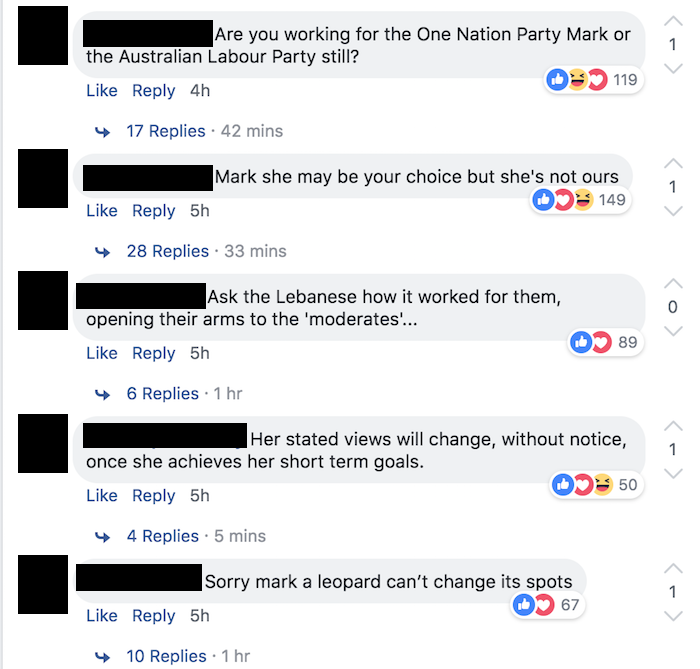 While most criticism focused on his categorisation of Eros critics as being on the “Lunar-Right”, some took issue with how dismissive he was of 9/11 and moon landing conspiracy theorists:

I honestly don’t know whether it’s heartening or depressing that overt reactionary fascism is only held at bay in Australia because the people peddling it and supporting it are all deeply incompetent. Maybe both.