Look, the idea of Berghain isn’t for everyone; clubs aren’t always everyone’s cup of tea (they’re certainly not this particular writer’s). Standing in a line for up to three hours with no guarantee of actually getting in, with the only reward being a place with way too many people in it and not nearly enough places to sit down?

Call me an old man, but that is legitimate nightmare fuel.

Regardless, the place certainly has an aura about it, and its seemingly fluid admittance policy is the stuff of legend; a code that no one seems to have cracked 100%.

The rules once you actually get inside are legendary too: No mirrors. No photography. And absolutely no taking liberties with the venue.

A little while ago one punter fortunate enough to get through the door also managed to get out of the building with a drinks menu from the famed upstairs Panorama Bar inside the club. And as you do in this modern, work-a-day world, he attempted to flog it off on eBay.

The story caught the attention of the internet, and evidently that of Berghain management as well, because the world famous nightclub called the one-time.

…which old mate is now also trying to sell on eBay. 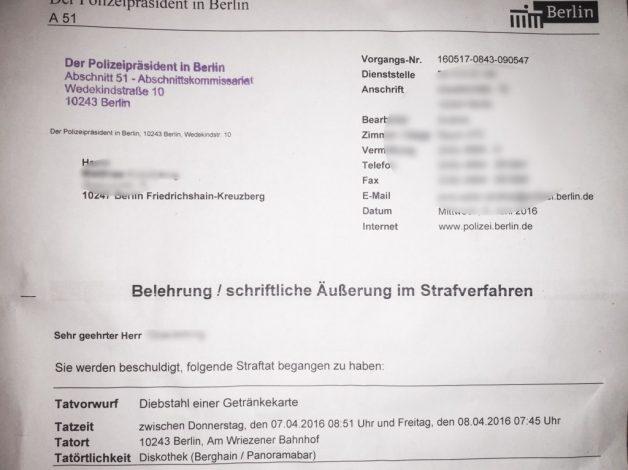 For those of you who don’t speak German, Google Translate indicates that the text reads roughly as follows:

They are accused of having committed the following offence:

Tatörtlichkeit (Google had no earthly clue what this meant): Nightclub (Berghain / Panoramabar)

You get the picture.

The eBay listing states that the letter is an “original” and “rare collector’s item” which… look, it’s a factually accurate statement.

“I (allegedly) stole a drinks menu from Berghain to sell it on eBay and someone went to the police to sue. lol

So the cops wrote me a letter.

I am now offering you this rare collector’s item in great condition.”

If owning a piece of evidence in a needlessly protracted and profoundly trivial German civil case seems like your kind of thing, the current bidding is sitting at a tidy €12.