Residents of the Pilbara region in the north-west of Western Australia have been advised to prepare for the landfall of Cyclone Stan, this season’s first cyclone.

The Category 2 storm, which currently boasts winds of over 110km/h, is expected to intensify to Category 3 before making landfall later tonight or tomorrow morning. With that change will come gusts up to 170km/h near the cyclone’s centre, ABC reports.

A Yellow Alert has been issued to residents in the affected areas near Port Hedland, urging them to prepare for the storms arrival by reviewing their action plans, and worryingly, asking them to tie down any outdoor furniture.

ABC also report mining sites and offshore rigs have been evacuated due to the storm.

The Bureau Of Meteorology have said the damage might not only come thanks to high winds; they’ve warned of the possibility of a “very dangerous storm tide” between Port Hedland and Bidyadanga to the north-east. Gusts from the cyclone can expect to be felt as far east as Broome.

Users on social media have been documenting the storm’s build-up too, building a pretty effective time-lapse of the cyclone’s growth and travels.

The exultant having a stand off with Mother Nature. Be safe everyone ??#stormchasers #bhagwanmarine #offshore #cyclone #pilbara #cloud #storm #cyclonestan #tugboat #oilandgas

On the other side of the country, heavy thunderstorms continue to batter Sydney, with the BOM saying the weather systems will continue to move south-east towards the coast. If you’re in those areas, it’s recommended you get your car undercover on account of “giant hailstones”, and be on alert for possible flooding. 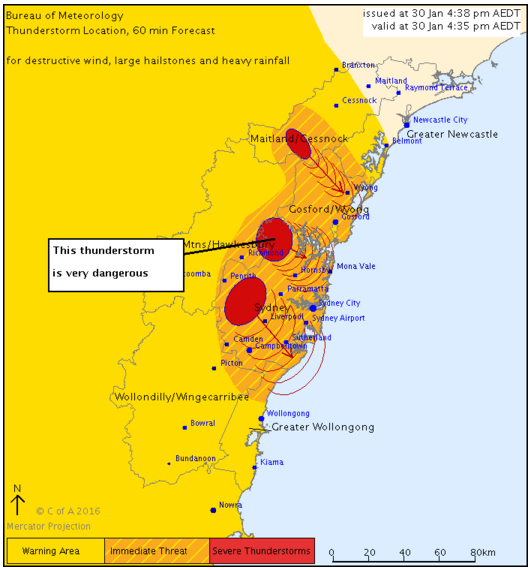 via The Bureau of Meteorology.

These storms come less than a day after the city copped an instantly iconic shot, courtesy of some metal-as-fuck lightning. Australia, you sure know how to have yourself a wild summer. Stay safe, all.