The infinite content well that is the Royal Wedding just keeps on giving, this time with something entirely unrelated to the Spice Girls or designer dresses ‘n ugly hats.

The “home of the Royal Family” on the internet, Royal.uk, apparently features lengthy biographies of all the Mountbatten-Windsor clan, a fact we just learned today. Everybody gets a bio, from the Countess of Wessex, Sophie Rhys-Jones, a woman I have never seen or heard of before (she’s the wife of Prince Edward, Lizzie‘s youngest son), to Prince George, who by age four has already lived a life worthy of 600-odd words about every place he’s visited and this picture of him and a dog: 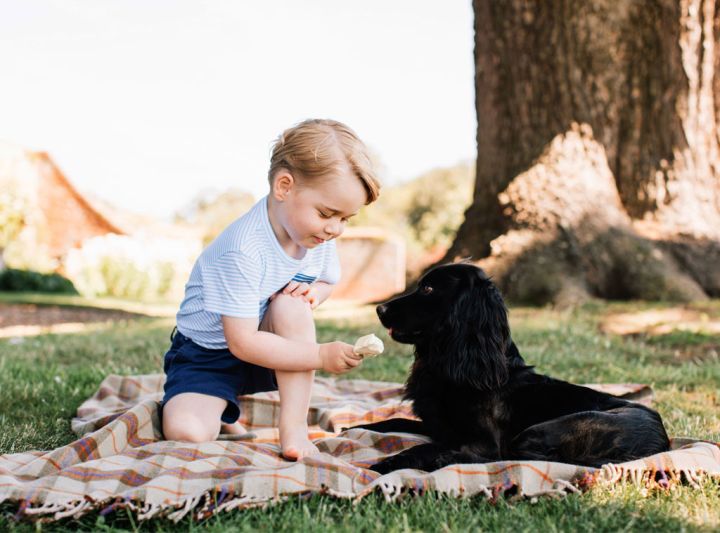 Even Prince Louis has one, and that kid’s been alive for a matter of days. Anyway, the page is a real who’s who of mostly middle-aged people who are born to rule or whatever, married into it, I guess, and their cute kids, which means that our girl Meghan Markle, one-time actress in Suits, now must also have a very regal biography online. A quick copy-paste from Wikipedia ain’t gonna cut it for the Duchess of Sussex, a title which has not yet stopped being fun to say out loud.

In the bio, there is literally zero mention of her roles on Suits or Horrible Bosses, but instead a laundry list of charity work, including mention of her time volunteering in soup kitchens as a young woman, and how at just 11 she was campaigning against sexist language in TV advertising.

That’s just the intro to a bio that is heavy on issues important to women – it’s feminist as heck, actually, which some consider a real turning point for the Royals. Like it straight-up talks menstruation and gender parity, describing her “lifelong commitment to causes such as social justice and women’s empowerment“.

Let’s just go to the text shall we, which explains that Markle became the UN Women’s Advocate for Women’s Political Participation and Leadership back in 2015, before she’d even met Haz:

In this role, she gave a speech on the importance of gender equality on International Women’s Day for UN Women in New York City. Ahead of her appointment to this role, Her Royal Highness spent time at the UN’s New York office to understand the organisation’s day-to-day work before embarking on a learning mission to Rwanda. On this trip The Duchess met female parliamentarian leaders in Kigali and visited Gihembe refugee camp, where women were working on leadership and empowerment at a grassroots level.

The biography goes on to explain that Markle joined World Vision as a Global Ambassador in 2016.

As part of her work with the charity The Duchess visited Rwanda on a clean water campaign that would work to allow young children to continue their education.

In 2017, Her Royal Highness undertook a second learning mission with the organisation when she visited India with World Vision to bring a greater awareness to girls’ lack of access to education. In the slum communities of Mumbai, The Duchess witnessed the work of the Myna Mahila Foundation who empower women through access to menstrual hygiene products and employment opportunities. Struck by her experience, she wrote an op-ed for Time Magazine about the stigmatisation of menstrual health management and its long-term hindrance to girls’ education.

And the Emmy for "Best Use of #RoyalWedding Platform" goes to… Duchess of Sussex, Meghan Markle!

Some people like that Markle’s passionate about these issues in her royal bio, while some people don’t like it at all: it’s the internet, that’s how these things work. And a number of people remain quick to remind all the haters that y’know, she’s a divorced woman of colour with a degree in theatre and international studies, and that’s pretty neat for a member of the Royal Family.

But can’t we all just agree that 1) she looked fabulous on Saturday, and that 2) charity work and advocacy for disadvantaged women are Good Things™?