McIver’s Ladies Baths – a sea pool to the south of Sydney’s iconic Coogee Beach – has been called out for transphobia after it was found to be explicitly barring trans women who haven’t had gender-affirmation surgery from using its grounds.

The popular women’s baths have been a refuge for women and children under 12 since 1922, providing a space for women to bathe and relax without the presence of men. It’s a space where all women are able to feel comfortable and respected in their own skin, come for free swimming lessons, and spend time with each other. It has also historically been a place where women of religious beliefs could bathe, including nuns from the local Brigadine Convent and Muslim women.

This week, the baths – and the Randwick & Coogee Ladies Swimming Association, which manages the pool ground – have faced a massive backlash from the wider transgender community and its allies and supporters, after its online FAQ section said that transgender women who haven’t had gender-affirmation surgery are barred from using the baths and surrounding grounds.

Until Tuesday, the website said only trans women who had undergone gender affirmation surgery were allowed to enter the space.

I wonder who's job it is at McIver's Ladies Baths in Coogee, to check people's pants to see if they have the "correct" genitals?https://t.co/e3785XaBeN pic.twitter.com/AbIQQ1lXKM

Many women have shared their upset with the baths rulings, detailing how much the safe space has meant to them while they explore their own gender identity.

mcivers is an extremely important place to me. i have so many beautiful queer memories associated with it. as a trans woman, it’s one of the first places I felt comfortable about my body in public. this breaks my fucking heart https://t.co/gFKW3N3Fdz

i’ve never experienced outward transphobia or been hassled about my body/gender at mciver’s, which makes me wonder where this decision has even come from. who was asking for this? either way it’s now just another place i don’t feel welcome or safe being as a trans person

Literally the only place I’ve gone swimming since transition.

Becoming allergic to water doesn’t help but I’m hoping to get on top of that, and this just leaves me saying fuck

In response to the backlash, the McIver’s Baths FAQ said it had been granted an exemption from the Anti-Discrimination Act 1977 by the NSW Government, and that further inquiries should be directed to the local council. 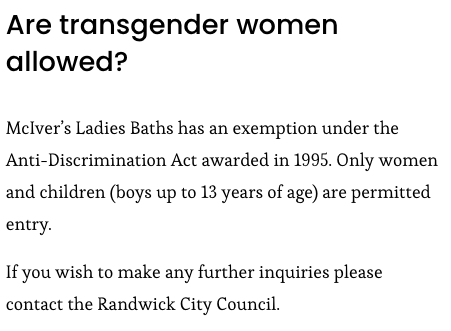 The baths’ Facebook page also issued a statement – which has since been deleted – doubling down on the exemption and directing anyone with further questions should contact the Randwick City Council.

At the time of writing, the McIver’s Ladies Baths are not on the current Sex Discrimination exemptions and applications listed on the Australian Human Rights Commission website.

On Tuesday, January 12, the McIver’s Baths FAQ section has been further amended, removing the Discrimination Act exemption comment and instead noting that transgender women as defined by the NSW Discrimination Act are welcome at the baths.

Section 38A of the 1977 Anti-Discrimination Act (NSW) defines a transgender person as anyone:

PEDESTRIAN.TV has requested comment from both Randwick City Council and the Randwick & Coogee Ladies Swimming Association, but neither party responded before the deadline.

A council spokesperson has made a statement on the issue of access for transgender women to the McIver’s Baths.

“Randwick Council is an inclusive organisation that values diversity in our community, and have always supported the inclusion of transgender women at McIver’s Ladies Baths,” they said.

“McIver’s Ladies Baths is located on Crown land and sub-leased to the Randwick and Coogee Ladies Swimming Association who are ultimately responsible for management and entry to the baths.

“It is our understanding the Association has always had a policy of inclusion and we have been in contact with the management of the baths to ask them to more accurately communicate this inclusive position on the issue on their website.”

If you’d like to talk about the issues raised in this story, you can call the QLife LGBTI peer support hotline on 1800 184 527 or chat online.