I know 2020 has been an absolute dumpster fire of a year, but can we at least thank our lucky stars that the clown purge is over?

Back in 2016, I was a wee 18-year-old who was experiencing normal adult things for the first time. It was a big year for me, I moved out of home, started (legally) drinking, dropped out of uni like seven times and encountered the horrifying reality of the clown purge.

Now, I don’t know if it’s just because I lived in a crime-filled, murder-y neighbourhood in Adelaide, but I vividly remember being absolutely scared shitless when this was happening. But looking back, I’m just really confused how this actually took off.

So, on account of the fact that I have nothing better to do in lockdown, I have taken it upon myself to deep dive into what the actual fuck the clown purge was.

For all of you who somehow missed the whole saga, the clown purge kicked off when five pictures of a creepy-looking clown named Gags just roaming through an abandoned carpark started circulating online. The Gags saga quickly grabbed media attention, with Fox News and other major outlets reporting on it, and copycats soon following suit.

It turns out the whole thing was sparked by some guerrilla advertising for an indie horror film, which was produced in Green Bay, Wisconsin.

Local man Adam Krause was the mastermind behind the whole thing, later claiming that it was a marketing ploy for his horror film Gags.

But although the original clown sighting was a hoax, the impact of the phenomenon was very real.

Despite kicking off in America, when the “clown purge” hit Australia, it didn’t take long for police to get involved, warning people that they could get hurt or die as a result of the global prank.

“There’s the potential for retaliation or people could be seriously hurt or could die by trying to get away,” Campbelltown police Inspector Tara Norton said at the time. “You also don’t know if the person has a physical condition or mental condition where this behaviour could have disastrous effect.”

Police warnings aside, thousands of Australians still participated in the threatening prank, posting warnings to social media that caused genuine panic for many people. 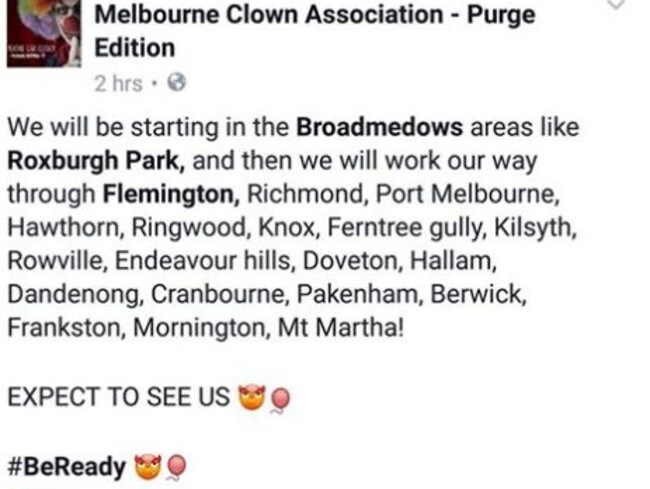 If you actually participated in this, please get in contact with me because I have some questions. For starters, why? And as a follow up, are you okay?! (Email me: lavender.baj@pedestriangroup.com.au)

Do you know what I was doing in 2016? Sitting on my couch eating Ben & Jerry’s, NOT swinging axes around scaring people in the streets.

I’m not kidding when I say this shit gave me nightmares for months.

And, as you’d expect when people walked the streets terrorising people in creepy clown costumes, people were arrested.

A 23-year-old man was arrested in Victoria at the time after allegedly terrorising people with an axe at a local fast food restaurant. He was eventually charged with ­assault, weapons, public order and disguise-related offences, according to The Australian.

Obviously, the non-murdery clowns (still creepy) were outraged by the ordeal, with many speaking out about how it had a really disastrous impact on their livelihood, with Ronald McDonald even keeping a low profile in the US during the ordeal.

So, if you’re looking around at the madness of anti-lockdown protesters and whatever else is happening in 2020 wondering how we got so fucked up, just be glad that we’re not dealing with axe-wielding clowns anymore.

Honestly, what the fuck was that?

In conclusion, thanks, I hate it.