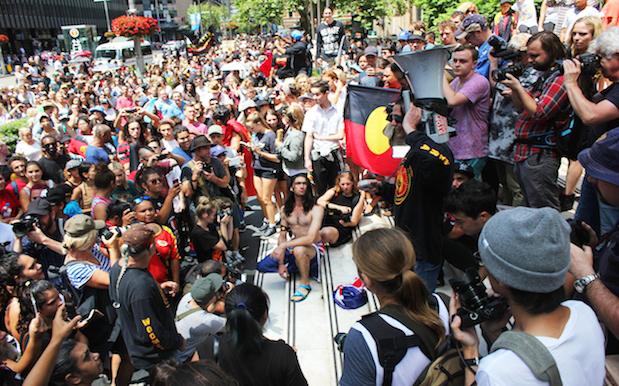 To some, today marks an annual celebration of the country they live in. But to many Indigenous Australians, January 26 is a day to mourn an attempted genocide, and is commonly known as ‘Invasion Day’ or ‘Survival Day’.

Protest marches were held all over the country today, and PEDESTRIAN.TV attended the march in Sydney.

Moving from The Block in Redfern, through to Town Hall, the people power and passion was mind-blowing and stirring. Over 3000 people attended, all chanting through the streets, ‘Always was, always will be, Aboriginal land’ and ‘What do we want? Sovereignty. What do we have? Fuck all!’

At one point, protestors gathered in the middle of a busy intersection, shutting down rows of traffic on George St:

“this March stops for no fucking traffic, don’t let them break us up!” #InvasionDay #sydney pic.twitter.com/3pBxvOC3nW

At Town Hall, protestors were able to listen to speeches and lived experiences from Aboriginal rights activists, as well as ally and journalist John Pilger.

Images from the Melbourne and Brisbane are also circulating on social media, with people acknowledging that the land we stand on belongs to First Nations people, and mourning for atrocities in the past and present:

Jan 26th Lest We Forget #InvasionDay