The Morrison Federal Government is seemingly set to shut the doors on a major Melbourne Centrelink outlet on just 24 hours notice, leaving thousands of people in the lurch mere days before the current suspension of mutual obligation requirements is set to expire.

Centrelink’s Abbotsford location is set to cease operations effective this coming Friday, May 22nd, with the Services Australia website now asserting that the office’s operations are “consolidating” into the South Melbourne location. That gives staff working at the Abbotsford location, and more importantly customers, just 24 hours to adjust to the shift.

Greens MP Adam Bandt revealed the Liberal Party’s plan on Twitter earlier this afternoon, asserting that the extremely last minute decision was being made as a result of Government officials both failing to negotiate a lease extension on the Abbotsford site, and failing to find a suitable alternative location in time. Bandt labelled the decision a “stunning act of savagery.”

BREAKING: In a stunning act of savagery, the Liberal gov has just announced that it is closing the Abbotsford Centrelink TOMORROW.

Gov's excuse that they couldn't negotiate a lease extension or find an alternative site is simply not credible.

Telling people to go to Sth Melb is not good enough & shows no understanding of the area.

The gov has snapped back to attacking the vulnerable. #SaveCentrelink

Former Labor leader Bill Shorten was also quick to put the boots to the Government over the call, stating the closure was a “mongrel act.”

A mongrel act – Govt announces Abbotsford Centrelink will close in less than 24 hrs.

In the midst of shocking job insecurity, this lot think the answer is shutting up shop.

Stuart Robert should come clean about this plan to rob communities of local services.#SaveOurCentrelink

Services Australia General Manager Hank Jongen issued a statement regarding the change a short time ago, asserting “The outcome of comprehensive lease negotiations with the Yarra Service Centre landlord, has resulted in Services Australia being required to vacate the building before the lease expiry date of 22 May 2020.”

“We are committed to providing quality face-to-face assistance for people accessing our services,” Jongen said.

Previously, the Yarra Services Centre had absorbed some of the Medicare-related services from the Melbourne CBD Bourke St location in March of this year, as those services were split amongst the Newmarket and Windsor centres, as well as the Abbotsford location. 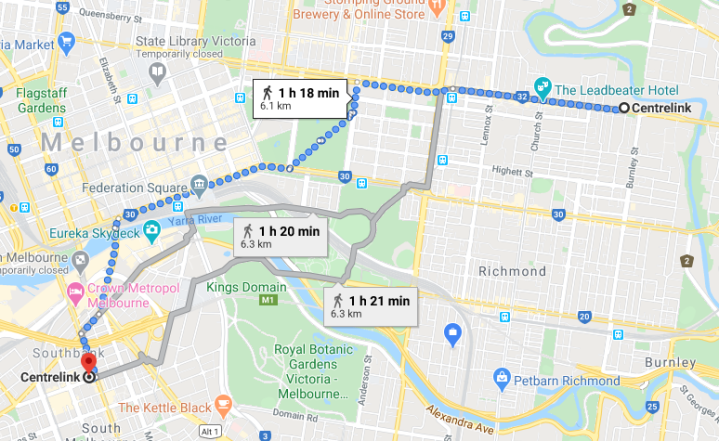 Nearly 600,000 Australians lost their jobs in April alone as a direct result of the current pandemic-related economic downturn, forcing hundreds of thousands of people to attempt to access Centrelink JobSeeker payments.

Federal Minister for Government Services Stuart Robert has not yet issued public comment on the issue.