When over 1.3 million people put in for Celeste Barber‘s viral bushfire relief fundraiser, many people assumed the money would go to people who’ve lost everything. But on Monday afternoon, the Supreme Court ruled that this wouldn’t be allowed.

Why can’t the money be shared?

It all stems back to the Facebook fundraiser itself. On the page, it listed the NSW Rural Fire Service & Brigades Donation Fund as the recipient.

Barber says she never expected to raise such an enormous sum – the initial goal was only $30,000, and instead she passed $51 million. This explains why she listed just one organisation out of many around Australia.

PayPal then paid this money to the NSW RFS, as stated on the Facebook page. But once it was in the RFS trust, a bunch of legal issues came into play.

At the time, both Barber and the NSW RFS publicly said they were trying their best to share the cash as widely as possible. People felt it was more money than the brigades needed, and that it would be better spend being shared with victims, other states, and organisations dealing with the aftermath.

But the laws around trusts state that the money donated must be used according to the deed. In this case, the deed said the money must be given “to or [spent] for the brigades” to assist with “purchasing and maintaining fire-fighting equipment and facilities”.

This is why the Supreme Court wasn’t able to budge, despite calling Barber’s campaign a “spectacular success”. 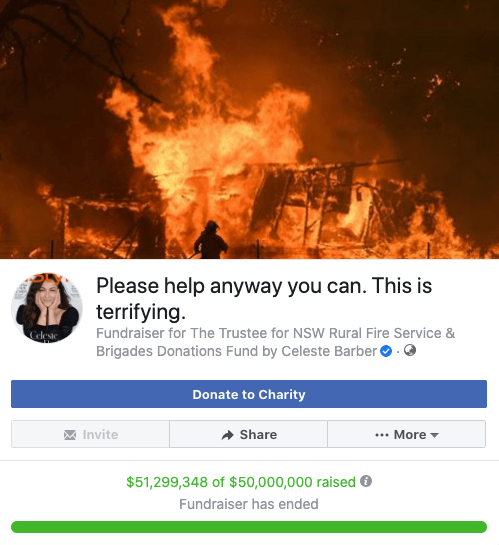 “Despite the trustees’ wish to honour those intentions or hopes, the law provides principles that ensure a degree of certainty in the application of trust funds including charitable trust funds and the court has applied these principles in giving its advice,” Justice Michael Slattery said.

That means the money can only go to the fire brigades, rather than charities such as the Australian Red Cross helping with rebuilding, or even with the NSW-based animal welfare group WIRES. Similarly, the money can’t leave NSW, despite the fires also ravaging Victoria, Queensland, South Australia and the ACT.

Does this mean the NSW RFS now has $51 million they can only spend on equipment and facilities?

Not quite. Justice Slattery ruled today that the funds can be donated to injured firies, or to the families of firefighters who died. (In the Black Summer bushfires, three volunteer firefighters died.) This goes beyond what the original deed says, but is still legally sound.

NSW RFS Commissioner Rob Rogers welcomed this part of the ruling, telling ABC Radio the money will look after firefighters and their families for years to come.

“We want to make sure that the funds that have come in, that they have longevity and we can make sure we can look after firefighters and their families many years into the future,” he said.

“The important thing is for the people that donated money to the RFS, they can be assured we’re going to spend that just on making sure volunteers are better equipped and able to do their job better,” he said.

Was this decision a surprise?

Not in the least. In fact, concerns were raised even as the fundraiser tipped into record numbers. The RFS said quite early on they wanted to share the money, but as the Supreme Court ruling unfortunately revealed today, that’s just not possible.

However, there’s no bad blood – not between Celeste Barber, the RFS, or organisations like WIRES which missed out on the windfall.

“Celeste brought local and global awareness of the people, the environment and the animals that were so badly affected by these devastating fires and she deserves our congratulations and appreciation,” WIRES CEO Leanne Taylor said.

Barber previously told PEDESTRIAN.TV that the fundraiser had become far bigger than she ever anticipated.

“I just had the stupid face that everyone’s probably sick of seeing.”