What is Barack Obama going to do now that he’s got no country to run? He could run a massive goddamn charity like Bill Clinton, do some terrible paintings like George W Bush, or build houses for the homeless like America’s favourite clown, Jimmy Carter?

Or, if Cards Against Humanity have their way, he’ll be making up alternatively funny/gross/depressing jokes for the rest of his life: 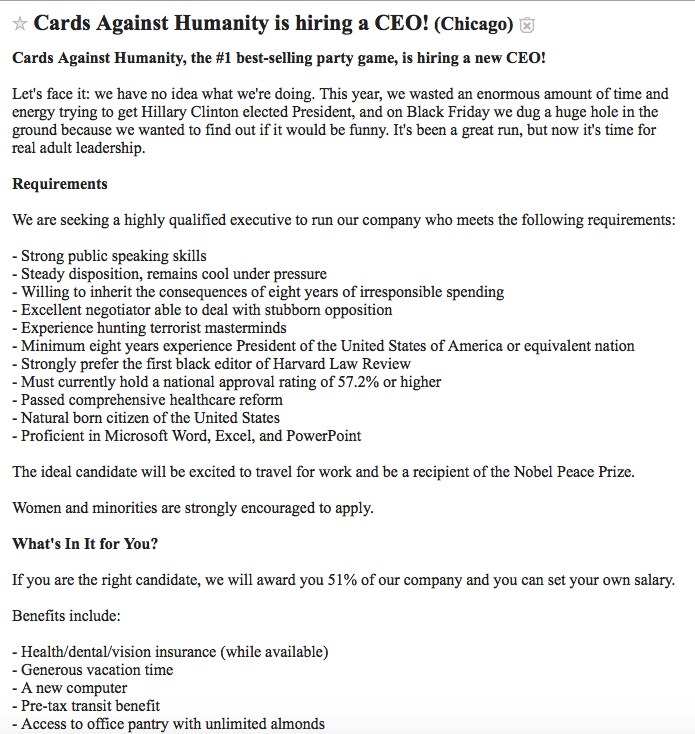 Yep, everyone’s favourite drinking game is looking for a new CEO, and their only requirement is that the person has been or currently is Barack Hussein Obama.

In a Craigslist post (because of course they’d use Craigslist), the company admits they’re in need of some new management:

“Let’s face it: we have no idea what we’re doing.”

“This year, we wasted an enormous amount of time and energy trying to get Hillary Clinton elected President, and on Black Friday we dug a huge hole in the ground because we wanted to find out if it would be funny. It’s been a great run, but now it’s time for real adult leadership.”

And the first few requirements seem pretty above-board, with the company looking for things like “strong public speaking skills” and a “steady disposition.”

Soon, however, it becomes pretty obvious this job is not for us normies. Other requirements include:

“Must currently hold a national approval rating of 57.2% or higher

On top of a 51% stake in the company and whatever salary he wants, they’re also offering the former President the opportunity to “be our new Dad if you want (optional but strongly preferred).”

And hey, why wouldn’t Obama want to run the company? He’s always seemed like a lot of fun, and he definitely needs the work.

I mean, as long he could overlook the fact that he already features heavily in this game.

What helps Obama unwind? The Violation of our most Basic Human Rights! #ccot #PJNET #2A pic.twitter.com/mAhRjAmg7h