The air quality in Canberra has been rated the worst of any city in the world today, as smoke from surrounding bushfires blankets the nation’s capital.

The IQAir AirVisual website rates the air quality of cities around the world in real time, on an index ranging from 0, which means ‘good’ to 300 and above, which means ‘hazardous’.

As of 3.30 this afternoon, local time, the air in Canberra is rated at 856, making it ‘hazardous’ – this means that there is a “serious risk of respiratory effects” and outdoor activities should be avoided. 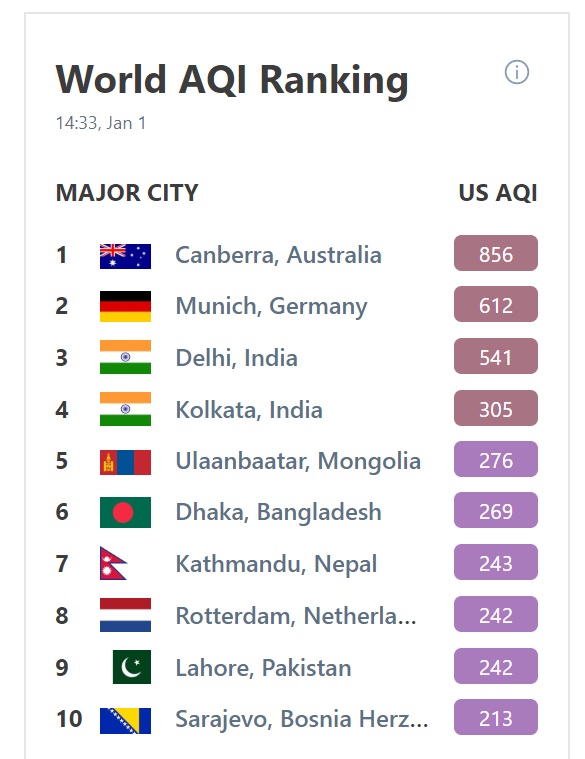 You can read more about the site’s methodology here.

ACT Health has put out an alert about the deterioration of air quality due to heavy smoke, and warns that the smog is “extremely thick” and is expected to linger in coming days.

Canberra residents have taken to social media to share photos of the smoke blanketing the city and greying-out major thoroughfares.

Twitter user Hanny Hawkins described the city as a “ghost town” and said that “even inside, the smell is sickening.”

#Canberra’s a ghost town this morning.
Even inside, the smell is sickening.
We’ve been choking on smoke for most of the last month.
And we’re still a month shy of the peak bushfire season.#AustralianFires #canberrasmoke #NewYearsDay pic.twitter.com/71i7ZgZqcL

Conditions have been described as “apocalyptic”, a sadly common refrain all across Australia this fire season.

An apocalyptic start to 2020 in Canberra. I am hiding from the smoke inside next to the air purifier. Looks like the end of the world #Canberrasmoke #AustraliaBurns #ClimateEmergency #auspol pic.twitter.com/04HUr1JtSN

A Big Bash cricket match had to be abandoned in Canberra on December 22, as the smoke was already so thick that players were complaining of breathing difficulties.

Close to six million hectares have been burned already this bushfire season, with an estimated 2500 buildings destroyed and 14 people known to have died

This is the main road into Canberra right now. What a way to start a new year…..@abccanberra @abcnews pic.twitter.com/M0iJJ4vkB3