The world is weird and mostly bad, but do not despair: a 73-year-old man from Cairns has been allowed to keep his miniature horse.

John Whitehouse is a resident of Clifton Beach, and he has bipolar disorder. He got Mya, the Labrador-sized mini-horse companion animal, about two months ago. He keeps her in the back yard of the suburban home he shares with co-owner Peter Simpson, and is already very attached to her, because LOOK at her who WOULDN’T be she’s an ANGEL WALKING ON FOUR HOOVES: 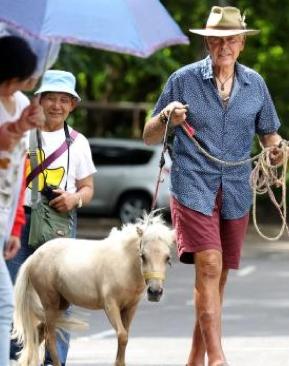 Of course, because the powers that be are committed to extinguishing all joy in the world, the Cairns Regional Council wasn’t so keen on Whitehouse’s maned companion. They told Whitehouse and Simpson that they could face a $6000 fine for keeping the horse on a property under 2000 square metres.

All this after Mya’s companionship had already made such a difference to Whitehouse, with Simpson telling the ‘Cairns Post‘:

“This, with his new medication, has really calmed him down. It makes him get up in the morning to take it for a walk on the beach and everybody around here loves it. People come up and talk to him and he gets a positive attitude from that.”

I know what you’re saying – JUST LET HIM HAVE THE HORSE, YOU MONSTERS!!! – but don’t panic.

Clifton Beach refused to take this blatant equine discrimination lying down. All of the locals are (obviously) in love with Mya, and 62 neighbours organised a petition to the council begging them to let Whitehouse keep the tiny sweet perfect horsie baby.

Cairns Mayor Bob Manning received the petition yesterday, and as all Disney-channel movie baddies do, had his heart thoroughly melted. He told the press:

“I’m sure our people will work something out.“

One can only imagine that he then glanced into the camera and winked.

Breathe a sigh of relief and rest easy, friends, in the knowledge that a man and his tiny horse will not be separated – not today.

Whitehouse has temporarily rented a caravan while the council sorts its smol-horse-hating shit out, and is presumably spending some quality time with Mya.

“I would be lost without her,” he told reporters.