Police operations are underway at both the Sydney Opera House and Manly, NSW Police have confirmed.

A police op is currently underway in the #Sydney CBD & #Manly. As the operation is ongoing, no further info is available at this stage.

The Opera House has been evacuated, with police cordoning off the area.

A witness to the ongoing incident, Scott Lilleyman, told PEDESTRIAN.TV that he was walking through the Botanic Gardens when we came upon gates manned by security. He then walked back around to the Opera House and saw a number of police.

“They have roped it off,” he told P.TV, “and all the people in the area had been moved on.”

This includes catering staff from restaurants inside the Opera House, he said.

Ferries from Manly to Circular Quay has been cancelled due to the operation.

One of the ferry terminals has been blocked off, staff said all routes moved to the next wharf #operahouse pic.twitter.com/PNYpnAayBq

The 2:40pm and 3pm Circular Quay to Manly ferries are delayed up to 20 minutes due to a police operation at Manly and the Sydney CBD.

An alleged employee of the Opera House has posted a comment on a Reddit thread about the incident, stating that he is currently inside the building. He has posted an internal email from Head of Security, which states that employees have been advised to stay inside: 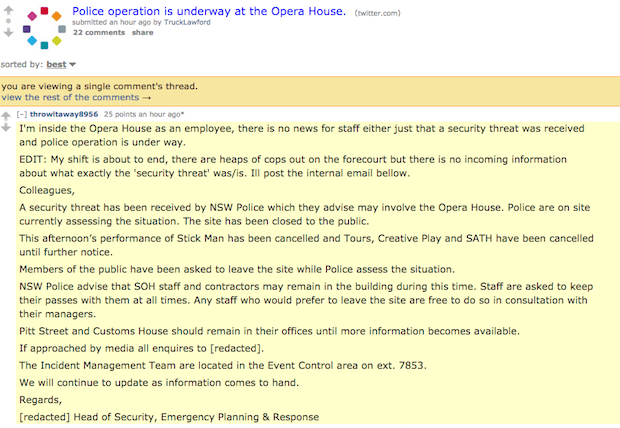 According to Nick Ralston from the Sydney Morning Herald, the operation was launched due to a threat against a Manly ferry – this has not yet been confirmed by police.

The barricades have been removed, police cars are filing out, and people are now allowed back in the Opera House forecourt. According to Johnny Lieu, security have said that the Opera House is in the process of reopening:

A mild scare, but it’s back to picturesque normality for the Sydney Opera House. @mashableAU pic.twitter.com/LzQQMIomQ0

NSW Police have released a media statement announcing the conclusion of the operation. There has still been absolutely no information given about the reason for the operation, but there is a Crimestoppers tag at the bottom asking people to come forward with any information about this incident: