Popular sunscreen maker and provider of that annoyingly catchy beach jingle Banana Boat has received hundreds of complaints from people claiming they were horrific burned after applying the cream.

In one of the worst cases, Brisbane parent Kirsty Hellmech says her 9-year-old daughter Abby received second degree burns from less than an hour in the sun after applying Banana Boat’s Peppa Pig sunscreen, and ultimately had to be hospitalised:

“She went down onto the beach to play with her brothers and about 45 minutes later she came back up saying that her back was burning,”

“So I lifted up the back of her bikini top and she was really dark pink, bordering on red already.”

“By 4pm that afternoon she had blisters the size of 10 cent pieces on her back. And this is a kid that doesn’t generally burn, she’s got olive skin.”

Adults are also complaining of Banana Boat’s SPF 50+ product, including Melbourne sales manager Briar Houston (pictured above) who says she was left so “horrifically” burnt after using the cream that she struggled to walk. The company’s Facebook page is currently flooded with more complainants.

But in a statement to P.TV, Banana Boat Regional Vice President Ivan Nuich said that while they are sorry about unhappy customers and take complaints seriously, they haven’t found any issues with the products:

“To date, we have never found any issues with our product range. It may seem like there are a lot of complaints but we have sold millions of sunscreens each year to many satisfied customers.

“In the cases where we have retrieved the product that was used and conducted additional testing the results have not shown an issue with efficacy.”

Nuich goes on to emphasise that all sunscreens in Australia are heavily regulated by the Therapeutic Goods Association (TGA), and that, “the recent ABC media coverage also records that “the TGA has found no issue with Banana Boat products having conducted its own quality testing’.”

He also mentions that no sunscreen can provide full protection, and suggests a range of additional protection measures such as sun-protective clothing and staying in the shade from 10am-2pm where possible.

But naturally, after seeing the same message posted to the company’s Facebook page, commenters remain unimpressed: 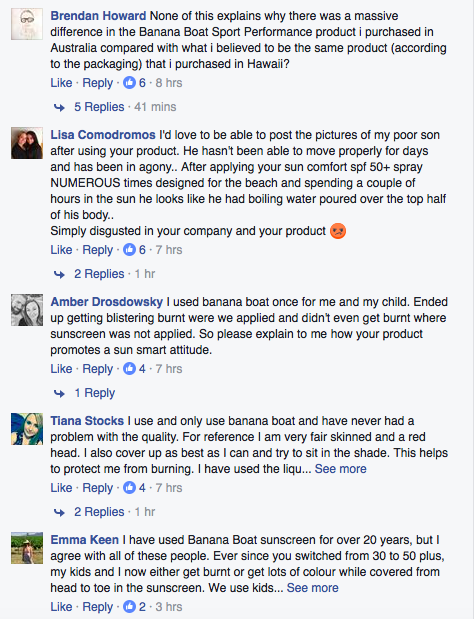 But while it might seem unlikely that this is all a media beat-up, considering the sheer number of cases, it’s certainly possible that the combination of recent extreme heat, irregular application of sunscreen, and mob-mentality has lead to the surge in Banana Boat complaints.

Whatever the case, remember what Sid the Seagull says, gang, and stay safe this Summer.