In a statement shared on Instagram, he wrote: “I want to personally apologise for the wrong artistic choice of concept for the gifting campaign with the kids and I take my responsibility.”

“It was inappropriate to have kids promote objects that had nothing to do with them.”

I think I speak on behalf of everyone when I say: no fucking shit?

Demna also said as much as he wants to produce thought-provoking work, he would never want to do so with the “awful subject” of child abuse, which he condemns.

“I need to learn from this, listen and engage with child protection organisations to know how I can contribute and help on this terrible subject,” the creative director continued.

“I apologise to anyone offended by the visuals and Balenciaga has guaranteed that adequate measures will be taken not only to avoid similar mistakes in the future but also to take accountability in protecting child welfare in every way we can.”

Balenciaga outlined the “adequate measures” it was taking in a separate statement shared on Instagram, which include implementing better internal and external content validation processes; reorganising its image department “to ensure full alignment with our corporate guidelines”; training staff on responsible communication; working with child-protection advocacy groups; and creating a fund for grants to child-protection organisations.

The statement was signed off with an apology from Balenciaga CEO and President Cédric Charbit.

“I want to personally reiterate my sincere apologies for the offence caused and take my responsibility,” he said.

“At Balenciaga, we stand together for children’s safety and do not tolerate any kind of violence and hatred message.”

Balenciaga also confirmed it would be dropping the $USD25 million ($AUD37.6 million) lawsuit against the parties allegedly responsible for the Spring ’23 campaign: production company North Six and set designer Nicholas Des Jardins and his company.

It comes days after the company explained how documents referencing child pornography appeared in the disturbing Gift Shop campaign.

In a lengthy statement posted to Instagram, the fashion house “strongly” condemned child abuse and said the the offending papers appeared due to a “a series of previous errors”.

“The first campaign, the gift collection campaign, featured children with plush bear bags dressed in what some have labelled BDSM-inspired outfits,” the statement said.

“Our plush bear beds and the gift collection should not have featured with children. This was a wrong choice by Balenciaga, combined with our failure in assessing and validating images. The responsibility for this lies with Balenciaga alone.”

“The second, separate campaign for Spring 2023, which was meant to replicate a business office environment, included a photo with a page in the background from a Supreme Court ruling ‘United States v Williams’ 2008 which confirms as illegal and not protected by freedom of speech the promotion of child pornography,” the statement continued.

“All items included in this shooting were provided by third parties that confirmed in writing that these props were fake office documents. They turned out to be real legal papers most likely coming from the filming of a television drama.

“The inclusion of these unapproved documents was the result of reckless negligence for which Balenciaga has filed a complaint. We take full accountability for our lack of oversight and control of the documents in the background and we could have done things differently.”

TikTokers zoomed in on the papers displayed in one campaign image and found documents from a Supreme Court case involving child pornography.

What are your thoughts? All of their child gift shop posts have been deleted. Would you buy? #balenciaga #banbalenciaga #childmodel #fashionmistakes

Balenciaga has since removed the campaign and issued a formal apology on Instagram after major backlash online.

“We sincerely apologise for any offence our holiday campaign may have caused,” the two-part Instagram Story began.

“Our plush bear bags should not have been featured with children in this campaign. We have immediately removed the campaign from all platforms.

“We apologise for displaying unsettling documents in our campaign. We take this matter very seriously and are taking legal action against the parties responsible for creating the set and including unapproved items for our Spring 23 campaign photoshoot. We strongly condemn abuse of children in any form. We stand for children safety and well-being.” 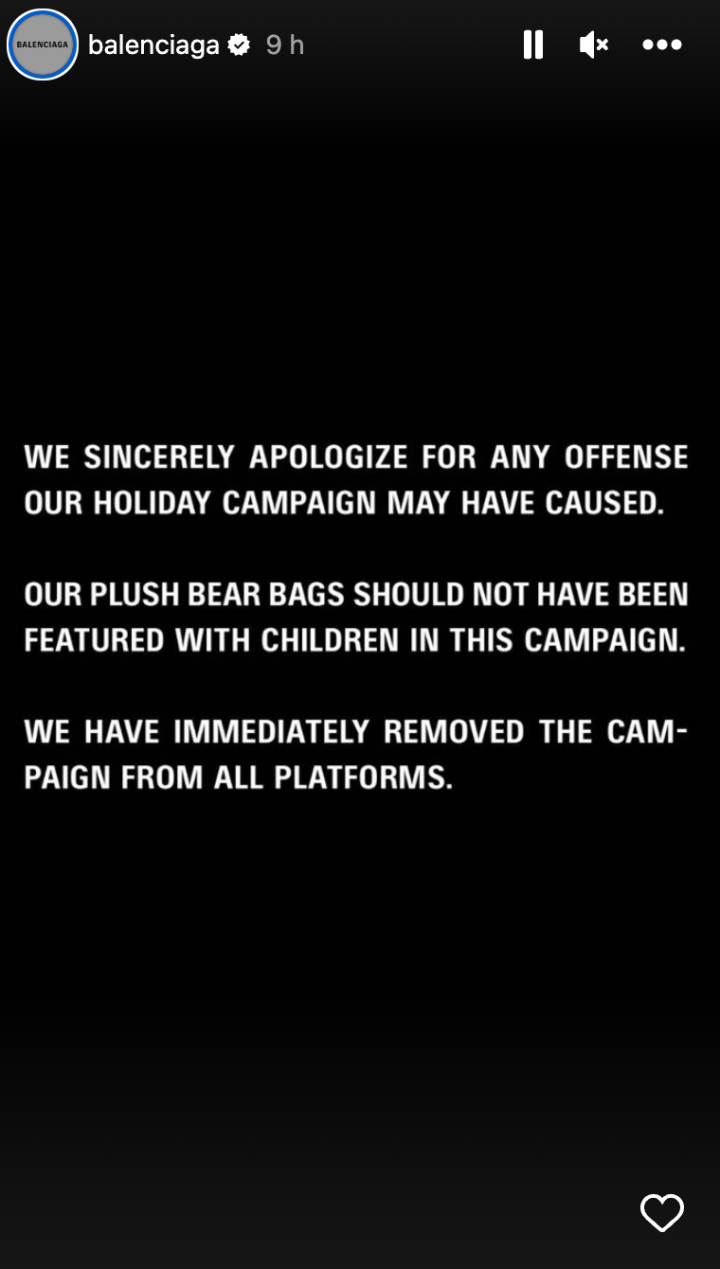 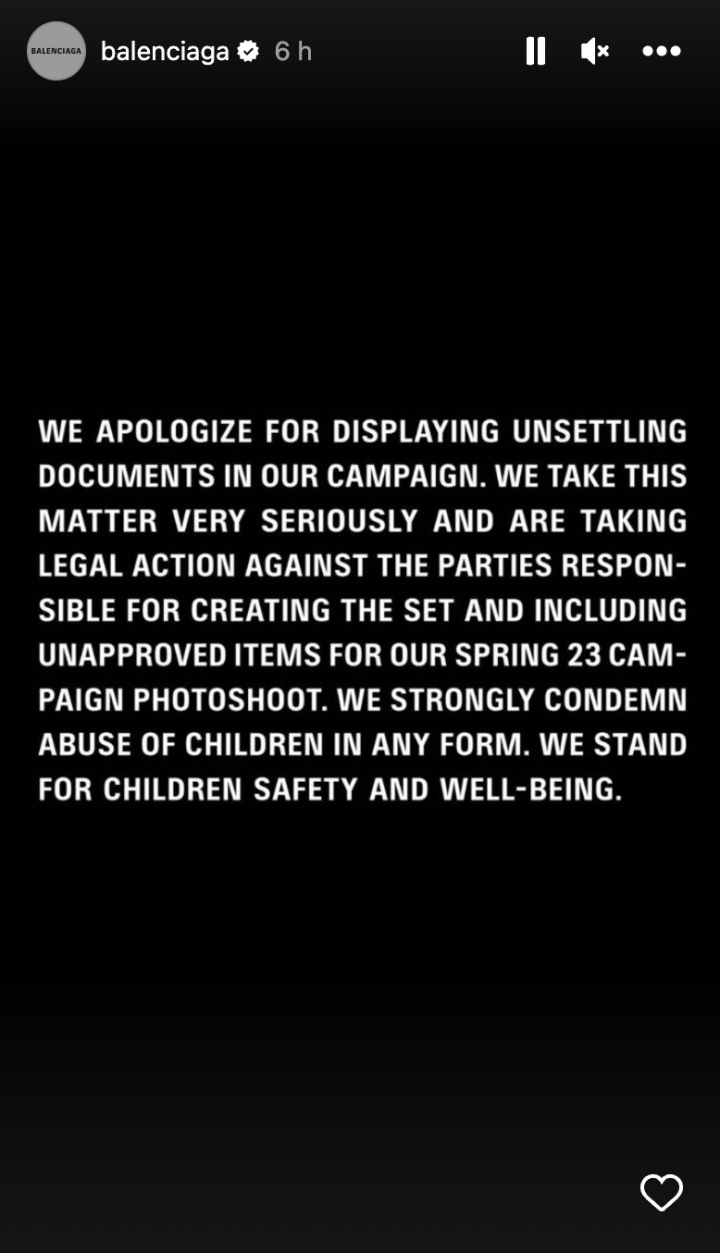 Celebrities have come out in droves to criticise Balenciaga, including Kim Kardashian, who typically has a favourable relationship with the brand.

Balenciaga has always pushed the boundaries by trying to pass a garbage bag off as an accessory worth $2577 and selling condoms as gloves.

But sexualising children in the name of fashion is absolutely fucking inexcusable.

And given the amount of people I imagine would be present at a Balenciaga photoshoot, how did no one put their hand up and say how messed up it looks to have a child posing next to sex toys and booze?

READ MORE
For Just $2577, You Too Could Own Balenciaga's New Luxury Trash Bag

The father, who chose to remain anonymous, told Daily Mail Online that the shoot was “an enjoyable day out” for his daughter and the pictures from it had been taken “totally out of context” by people on the internet.

“No parent would actively encourage the child to take part in something which was pornographic, and I think the publicity surrounding what happened has been blown out of all proportion,” he said.

The father revealed that most of the models in the shoot were children of Balenciaga employees who had approved of the campaign.

He also insisted Spanish photographer Gabriele Galimberti, who took the photos but had no say in creative direction, was “innocent” and didn’t deserve the backlash he was getting for his involvement in the campaign.

“I feel desperately sorry for Gabriele, this had nothing to do with him and he was merely taking the photographs as requested by Balenciaga,” the anonymous parent said.

“The parents of the children were at the shoot and they approved of what took place.”