The Australian government will place a travel ban on Italy from 6PM tonight as the coronavirus outbreak worsens there.

Italy is the fourth country with a travel ban imposed, after China, Iran and South Korea.

“We’ve received advice today regarding Italy, and that advice is that as the situation in Italy is now commensurate with the other countries where we previously had travel bans put in place, so we’ll be extending that travel ban to Italy now,” Prime Minister Scott Morrison said.

“I think that it is important not to overstate this – Italy itself has effectively put itself into lockdown with travel now, and this largely closes that loop.”

Australians citizens and residents who are currently in Italy will be allowed to return, but they will be obliged to undergo a 14-day self-isolation period. Non-Australians will be completely banned from entering Australia from Italy.

The government has given no indication as to when the travel ban will be lifted.

Italy has over 10,000 confirmed coronavirus cases, more than any other country except China. Over 600 people have died from the virus.

This week, the entire country was placed on lockdown, shuttering schools, workplaces and public gatherings. Internal travel restrictions and curfews have made cities like Rome and Milan resemble ghost towns.

As recently as Wednesday morning, SmartTraveller advised against all travel in certain regions in the north, and told potential travellers to “reconsider their need to travel” in all other parts of Italy. 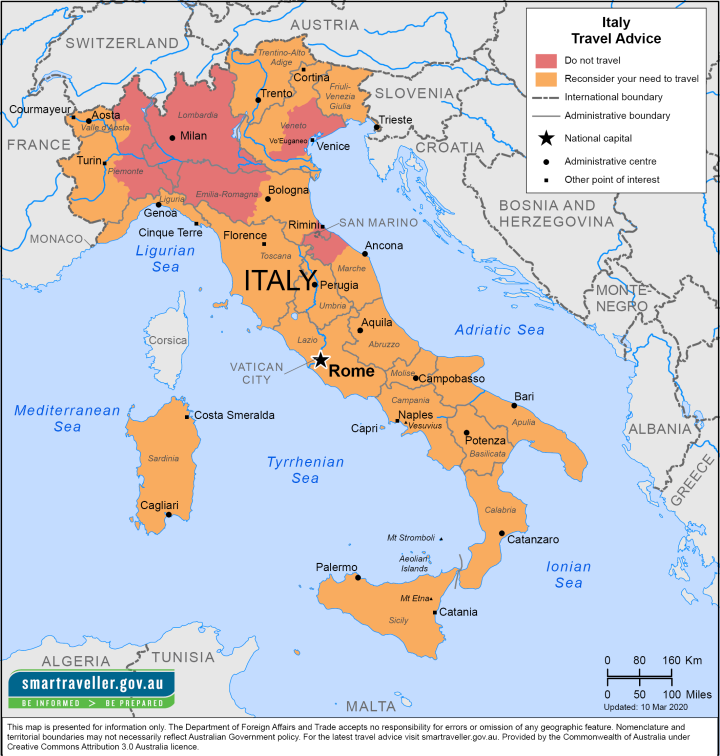