A quick story: I was in Kmart* over the weekend, and witnessed one poor bloke desperately ask an employee, “Do you have any fans left?” and this employee shake his head sadly and say “Nah, sorry mate… and I don’t think we’re getting them back in, either.”

Well, I’m sorry to say that unless that bloke found a standing fan at another store, he is royally fucked, because Australia is getting another heat wave this week and it’s not gonna be good.

Obviously it’s just come off the back of an unbearably hot weekend, so this is extremely rude stuff. You can bet we’ll be complaining to Bureau of Meteorology‘s manager (the Sun) to communicate that this behaviour is unacceptable and will not be stood for much longer.

So yeah, fire is coming. The east coast (and South Australia) is going to get hit with low intensity heatwave over Monday, Tuesday and Wednesday, with severe intensity heatwaves developing over central and eastern NSW. 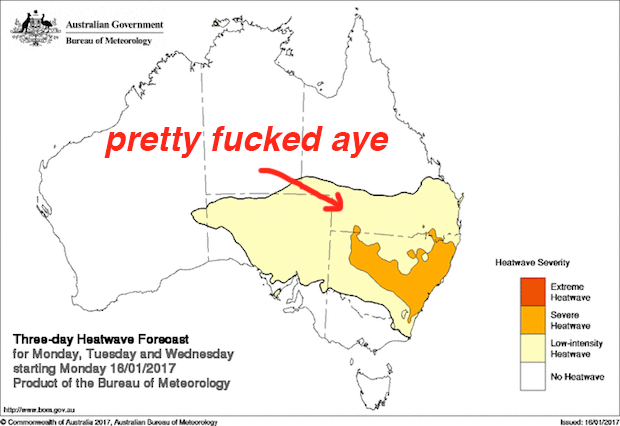 As the week goes on, the severe heat is going to move up the coast and into Queensland, with lower parts of the state experiencing the godawful-sounding ‘extreme heatwave’ around Wednesday. 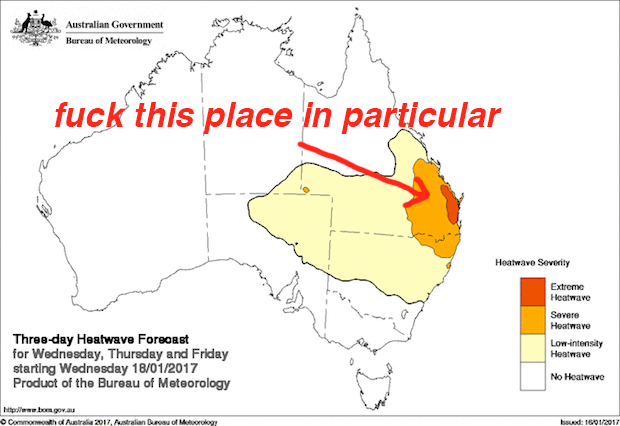 In Sydney, the weather’s going to peak at 36 on Wednesday, dropping down to 26 on Thursday, and bouncing back up to 32 on Friday.

In Brisbane and the Gold Coast, it’s going to stay in the low-to-mid thirties right through to the end of the week, while in Adelaide it’s going to hit a absolutely mental 38 degrees on Tuesday, while dropping down to a balmy (in comparison) 32 degrees on Thursday.

Melbourne, you’re also going to hit the 38 degree mark tomorrow (sorry), but after that you’re riding sweet in the low-to-mid 20s range.

Do whatever it takes to stay cool, mate. Take cold showers, refrain from physical activity, ensure an esky full of tinnies is within reaching distance at all times. This is crucial. Also, wear sunscreen.

*UPDATE: I’m worried some of you think I mean all Kmarts are out of fans. I want to stress that this took place at the Broadway centre in Sydney and may not be true for all Kmarts. There is still hope.