A report released today into the nightmare state of the Australian rental market has prompted hundreds of you to share your gag-worthy, spine-chilling and generally Very Bad™ horror stories of the Aussie rental scene.

The report, released by consumer group Choice, looked at several aspects of the unstable and stressful lives of Australian renters, finding – among other things – that 55% of young renters are being discriminated against by landlords.

And then on top of that, it found that we’re all so worried about being blacklisted by agencies or having our rents increased, we’re disinclined to ask landlords for basic things like, idk, fixing the stove. 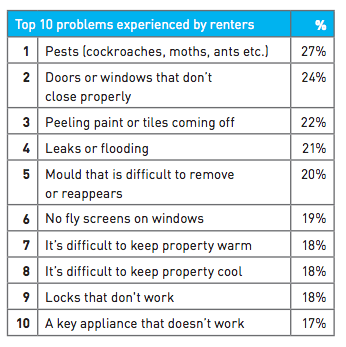 But tbqh with you, those ‘problems’ seem like child’s play to the absolutely fucked stories y’all are sharing online.

apply for a place. get an email a week later saying they’ve upped the asking rent $100, do we still want to make an offer. #RentInOZ

After I signed the lease, agent told me “By the way if anyone knocks asking for Michael, tell em to f**k off”. Michael dealt drugs #RentInOz

Was living alone as a 19 year old young woman. LL decided to sell. Heard the front door open one afternoon while naked in shower. #RentInOZ

It was the agent accompanied by strangers. No call. No notice. I was powerless to speak up against him. #RentInOZ

Gas oven stopped working. Real estate agent told me to just stick my head in the oven and light it with a match each time #rentinOZ

Renting is miserable. Our last landlord threatened to “fix” two broken air conditioners by removing them. Instead, they were left broken. https://t.co/Lyqrr0nQLx

Oh yeah! leaky kitchen sink tap at old place. Requested repair. Told by agent that it was unfixable, just put a bucket under it #RentInOZ

The #rentinoz hashtag is amazing. My last place had cracks in the walls and holes in the floors, and I feel like I got off light.

Landlords and Real Estate often give poor or no notice of their visits and inspections. Violating privacy. #RentInOz

Guess it’s finally time to accept our fates and buy a hous– oh.