PEDESTRIAN.TV has teamed up with Griffith University to spotlight careers that are creating a brighter future.

Growing up, Jessie Christiansen was a young girl who just loved the sky. She remembers getting a telescope and some large-format photographic exploration books that she loved as a kid. By the time she was in high school, Jessie was helping start her high school’s first astronomy club.

To me, the coolest bit would be being able to say that I’m a NASA scientist, but for Jessie, it’s more than just a sweet gig. Not only is she making discoveries for our society, but she’s making an impact in a male-dominated field. As of 2020, the proportion of women working across STEM-qualified industries in Australia was still only 28%.

We had a yarn with Jessie to find out more about how she become a scientist, the day-to-day of a deadset planet-hunter and the positive impact she hopes to have on the industry.

Take it away, Dr:

PTV: Was astronomy always something you wanted to pursue?

Jessie: “I didn’t realise astronomy was something someone could pursue as a career. It wasn’t until I started at uni that I realised the different potential research paths that lay before me. I originally started a degree in biotechnology. But when I realised astrophysics was a possible future, I switched over to a physics- and maths-dominated course load.”

How did your time at uni prepare you for your role now?

“My favourite part about Griffith University was the chance to visit and work with professors in different labs each semester. It gave me such a broad base for understanding the types of questions that can be asked, and importantly, the types of questions I was most interested in answering! I don’t think I would have gotten that wide variety of experiences at any other university.

In my current role, having a broader experience lets me bring in ideas from outside the proverbial box, which is at times, invaluable.”

So, what does a regular day of work look like for a scientist?

“Gosh, in that respect it’s probably a lot like every other job – lots of meetings and emails! Today, I had a meeting with my archive team about what planets we’re putting into the NASA Exoplanet Archive next week, and we talked through some small issues with a few of the planets.

I also met with two students who are helping me analyse new NASA data on a hot, rocky exoplanet that might be able to tell us whether the planet has an atmosphere! Then, I met with another colleague about a proposal we are going to put in, to work on a new science question about how very young planets form.

In the gaps between the meetings I read some new planet discovery papers and tried to think a little bit about my own next paper, which is also about young planets!”

What is your favourite part of being in your role?

“Watching my research group of undergrad students, postgrad students and postdoctoral fellows find some incredibly exciting results and bring them back to the group. Getting to watch them grow and mature as wonderful, thoughtful, generous members of the astronomy community is really a joy.”

What has been your career highlight to date?

“In 2018 I received the NASA Exceptional Engineering Achievement Medal for my work on the NASA Kepler mission, which I had started in 2010 and was definitely a labour of love for the first few years. I was very pleased to have been part of such a successful mission, and so surprised and humbled that my little part in it was recognised.”

What do you wish more people understood about your field of work?

“Space is really big! As Douglas Adams would say, mind-bogglingly big. We are finding potentially habitable exoplanets around some of our very closest neighbours (including the closest star to our Sun, proxima Centauri!), but they are still much, much too far away for us to ever visit in our lifetimes.

I think people get disappointed when I excitedly tell them about a new planet and the first question they ask is, ‘How far away is it?’. The answer is always, ‘Too far’.

What do you want the industry and world to look like in the next five years?

“Oooh fantastic question. In Australia, I hope the Australian Space Agency has carved out an important role in the global space industry, and also grown in partnerships with other countries and other industries.

I hope that NASA has continued its investments in the upcoming exoplanet missions that I’m excited by, and that international missions are also on pace for success.

Closer to home, I hope that astronomers and exoplaneteers have continued to work within our communities to improve diversity and equity in science, and to help solve some of the community’s most immediate problems.” 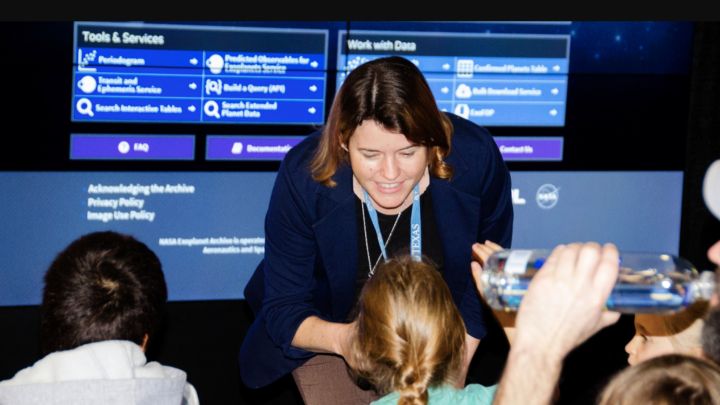 What matters to you most when it comes to your work and community?

“I want to make the field a better place for everyone who comes after me! Science, and especially natural sciences, have a lot of historical barriers and baggage, especially when it comes to historically marginalised communities. I want to help break those barriers down and leave a more equitable space – not just because studies show that leads to better science, but because it’s right.”

What does making a positive impact look like to you and in your career?

“I take every opportunity I can to mentor early career scientists, especially women, to make sure they have access to the experience and networking opportunities that might otherwise be hard to find. I’m grateful to be in a position to get to help folks now!”

And I have to ask…what’s your favourite planet?

“My favourite planet is always the next one! We have now found over 5,000 confirmed exoplanets, and I am lucky enough to be the lead scientist at the NASA Exoplanet Archive, which is how NASA keeps track of all the exoplanets we’ve found so far. One of my happy places is sitting down each week to look at the brand new collection of planets that are going in the archive.”

If Jessie’s path has inspired you to explore the world, then make your career matter with Griffith University.