International supermodel and winner of the Nobel Prize for Achievements in Cheekbones*, Andreja Pejic, has become the first trans model in history to be photographed for the cover of GQ.

*we’re working on getting this recognised as a category 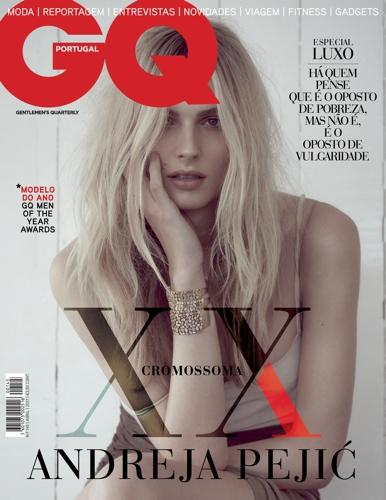 She appears in full ice-blonde smoulder on the cover of the April edition of GQ Portugal. Pejic also won ‘Female Model Of The Year’ at the GQ Portugal Awards in October 2016, making her the first trans woman to take the title.

The cover shoot and six-page spread in the magazine were photographed by Branislav Simoncik, and provides an opportunity for Pejic to talk about her experiences as a trans woman and model.

“To be honest, I never expected this moment. GQ is such a classic and respected men’s magazine and, while I am very proud of everything I’ve achieved, my modelling career has been everything but classic. So, in a way, this is a meeting of two different worlds and it represents progress.”

This is only the latest in a string of firsts for Pejic: she was the first trans model to be profiled in Vogue, to front a major beauty campaign, and to join Taylor Swift‘s infamous #GirlSquad. She’s also a muse for a number of fashion designers, the owner of her own line of unisex jewellery, and generally an all-round ultrababe, inspiration and Fashion Icon.

Really, the only surprise is that she hasn’t landed a GQ cover sooner.