Today show co-host Ally Langdon has been hospitalised after a water stunt went wrong on the Gold Coast. She basically stacked it in the water, while filming a segment for the breakfast show on Thursday.

Langdon injured her knee when she tried to ride a hydrofoil board, alongside her co-host Karl Stefanovic.

The water segment was apparently supposed to air on Friday morning before it all went tits up.

A hydrofoil is basically a fin with wings that extends from underneath the board. When the board gains speed, the hydrofoil lifts it (and you) out of the water, allowing you to rise above the surface.

I can barely walk up a flight of stairs without tripping on something, but alright.

A spokesperson for Nine, the show’s network, told the Daily Telegraph that Langdon had been rushed to Gold Coast Private Hospital on Thursday morning, and was still being treated by doctors as of Friday morning.

“Ally hurt her leg after landing awkwardly during filming a story yesterday and was sent to hospital,” another spokesperson told industry publication TV Blackbox.

“She is expected to return home to Sydney over the weekend. We wish her well and a speedy recovery.”

Footage from the segment shows Langdon being pulled to shore after the accident. 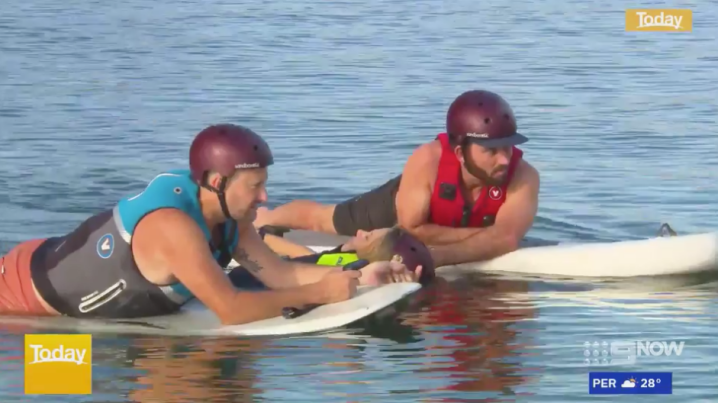 Ally Langdon injured herself while filming for Today / Today.

Fellow Nine presenter and journo, Lelia McKinnon, filled in for Langdon this morning on the breakfast show.

“She hurt herself really badly,” Stefanovic said about his co-host. “She’s in hospital this morning. She’s okay.”

McKinnon added that she received an early morning text from Langdon, wishing her luck on the breakfast show. Well, sort of.

“She messaged me this morning at 3.00 asking how I like the alarm. So she’s still got the same great spirit,” McKinnon shared. “But yes, doing it a bit tough. She is a tough one, so it’s quite bad.”

It’s currently unknown just how serious Langdon’s knee injury is, and neither Stefanovic or Mckinnon got into the specifics, but we’re wishing her a speedy recovery nonetheless.

You can catch the Today show weekdays from 5.30am and weekends from 7.00am on Channel 9.

As an aside, I forgot how brutal wake-up calls for morning shows are. Is the sun even up at 3am?