There’s a huge push right now to fly the Aboriginal flag alongside the Australian flag on top of the Sydney Harbour Bridge all year round, other than the 15 days per year it currently sits up there.

Over 75,000 people have signed a petition started by Indigenous woman Cheree Toka, which today received the backing of NSW Opposition Leader Luke Foley.

“As Australians, we are proud of our Aboriginal heritage and we want to recognise and celebrate this heritage every day,” said Toka on the Change.org petition, which she started on January 26 last year.

“[We] ask the Legislative Assembly and additional decision makers for a third flag to fly alongside the Australian and the NSW flags – one that acknowledges and celebrates our ancient and authentic Indigenous culture; the red, black and yellow Aboriginal flag.”

Right now, the flag only flies up there for 15 days of the year: during NAIDOC Week, Reconciliation Week, and on January 26.

Earlier today, NSW Opposition Leader Luke Foley promised to make it a permanent fixture of the iconic bridge if reelected. 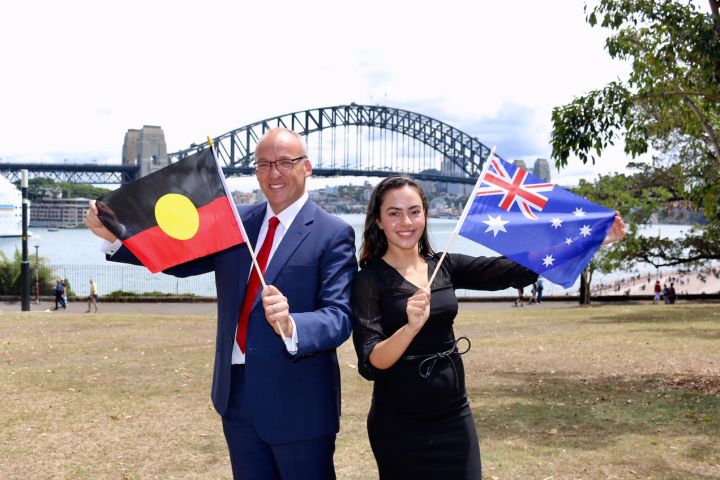 “The Aboriginal Flag is an officially proclaimed Australian flag and it will permanently fly alongside the National Flag and the State Flag at the top of Sydney’s most recognisable landmark,” he said. “We should all be proud of 60 000 years of indigenous history here. Flying the Aboriginal Flag on the great arch that defines Sydney around the world is an appropriate expression of that pride.”

NSW Shadow Minister for Aboriginal Affairs David Harris added: “Flying the flag is a sign of respect and can help foster a greater sense of community.”

Even Barry O’Farrell, the former (Liberal) NSW Premiere, lent his support to the campaign.

having started the practice of flying the Australian and Aboriginal flags side-by-side on the #SydHarbourBridge on #AustDay in 2013, the idea of extending it throughout the year is a reasonable & sensible idea. #reconciliation #walkingtogether #historymatters

However, the current NSW Government wouldn’t lend its support.

While Minister for Aboriginal Affairs Sarah Mitchell was quick to point out – rightly – that it was the Liberal government that first few the flag on top of the bridge, in 2013, she wouldn’t comment on the campaign itself.

“The Aboriginal flag is a critical part of many ceremonies in NSW and permanently flies in both Chambers at NSW Parliament and at Government House, it replaces the State flag on the Sydney Harbour Bridge on Australia Day and is also flown during National Reconciliation Week and NAIDOC week,” she told PEDESTRIAN.TV.

“In fact, it was the NSW Liberals & Nationals Government that introduced the practice of flying the Aboriginal flag on the Harbour bridge on Australia Day in 2013.”

Of course, there could be no move as simple as literally flying the flag of this country’s first people alongside the Australian flag that wouldn’t be torn apart by the insane commenters of this country.

Alan Jones called the push to “the most divisive thing I’ve heard from a political leader” (like, really, Alan? The most divisive?) and had Foley call him this morning to do little more than berate him.

“Luke Foley, have you gone mad?” he said.

“No, it’s not a good morning,” continued Alan. “We have an alternative premiere in this state who’s uttered the most divisive comment that would be possible.”

He later took calls from listeners, either telling them, “Good on you” if they agreed with him, and shouting at them if they didn’t. Not a well man, that one.