UNIFY Festival Reveals Its 2017 Lineup, And It Too Is A Total Sausage Party

A literal day after the Strawberry Fields bizzo, we’ve got ourselves another stark example of horrendous gender imbalance in music.

Metal/punk festival UNIFY (“A Heavy Music Gathering“) has revealed the full lineup for its massive, three-day UNIFY 2017 festival, set to take place this coming January in the Gippsland region of Victoria.

The festival, run by label UNFD and co-presented by Triple J and the Australian Hysteria Magazine, dropped the first-and-only announcement for the festival, scheduled for January 13, 14, and 15th next year.

The lineup sports a litany of large local and international punk, hardcore, metalcore, and metal acts, including the likes of Violent Soho, Northlane, Thy Art Is Murder, and a reunited Alexisonfire as headliner.

Check out the announcement poster below: 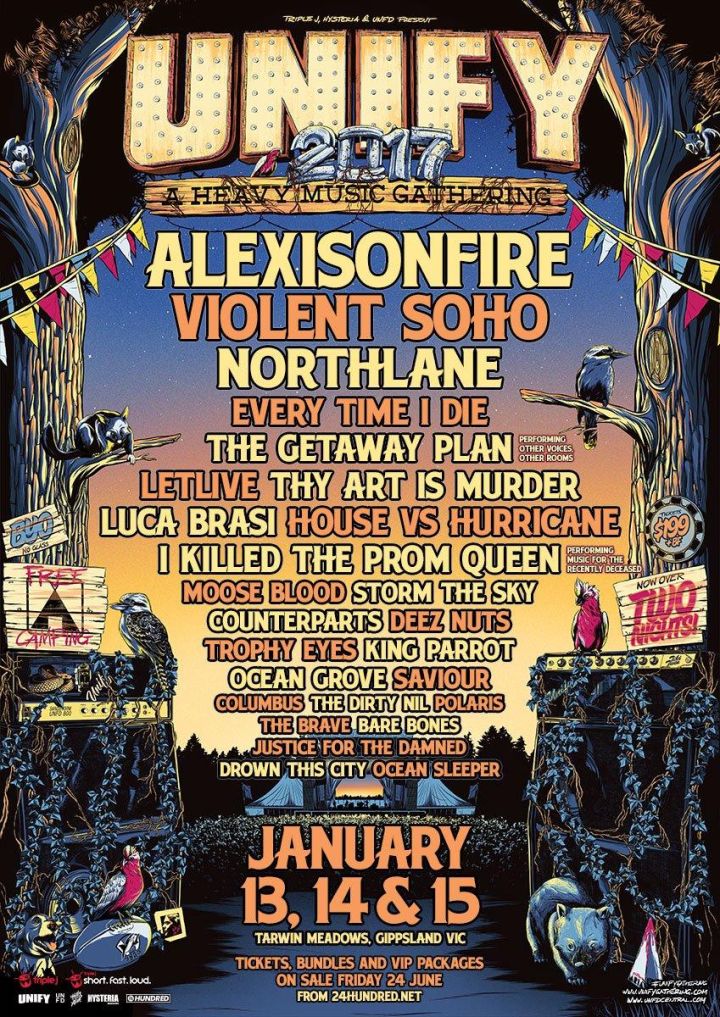 That’s a hell of a lineup, by anyone’s estimation.

But if you’re gazing across that list thinking it’s a little bit blokey, your eyes aren’t deceiving you.

The lineup, which according to UNIFY is full and final, sports 26 bands:

Those 26 bands consist of, in total, 119 band members who will be gracing the stage across the course of the festival.

Two bands out of twenty-six in total – Saviour from Perth, and Drown This City from Melbourne – feature women.

That is, not to be too blunt about things, not a great look.

Sure, it’s a reflection on heavy music in general, which historically suffers from a penis-heavy presence. But without the support and promotion of female artists by huge, visible festivals like this one, it’s a thing that’s simply never going to bloody change with any great meaning.

There is enough on this particular lineup to be jazzed on regardless; Alexisonfire and a second Moose Blood tour within 12 months? Hell fkn yeah!

But regardless, a performers ratio of 117:2? Unify could do better.

Tickets for UNIFY 2017 are on sale from midday this coming Friday via their website.